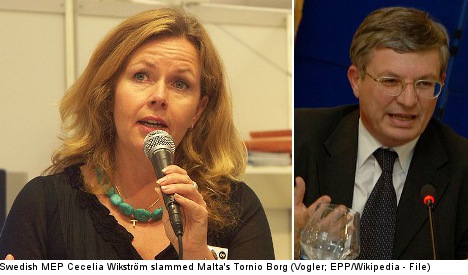 “This is a big, fat, splendid scandal that they are sending us, not a commissioner but a dinosaur,” Cecilia Wikström, a member of the Alliance for Liberals and Democrats in the European Parliament, said in an interview conducted in Sweden which she posted on videosharing website YouTube.

“I plan to take the lead so we can vote against him. We cannot accept him. This is not a commissioner for the 21st century,” she said.

Borg, who is also Malta’s foreign minister and deputy prime minister, has been tapped to replace fellow Maltese national John Dalli as EU health and consumer commissioner, who stepped down in October following allegations of influence peddling.

See Wikström’s interview below (in Swedish)

Borg has been a frequent target of criticism over his ultraconservative views, including during his campaign against the legalization of abortion in Malta last year.

He is due to appear before the European Parliament for a hearing on Tuesday.

Wikström, who is a vicar in the Swedish Lutheran Church, said she hoped the Parliament would vote against him.

“This is about human rights, about allowing people to choose how they want to live their lives,” she said.

“He is against divorce (and) women’s rights in general. He is against letting women choose freely how they want to live their lives, for example on abortion. And he’s totally against sexual and reproductive health and rights,” she said.