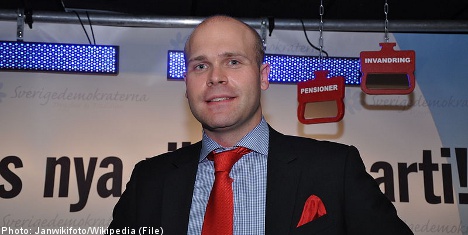 The high-level party members in the film are Almqvist, justice policy spokesman and MP Kent Ekeroth, and Christian Westling, who sits on the Stockholm city council.

The three got into a scuffle with an inebriated man at a fast-food outlet in Stockholm during the summer of 2010. The episode was filmed by Ekeroth – a clip later obtained by Expressen.

In the film, featured below, Almqvist is heard making racist comments to the inebriated man, using words like “darkie”, “cunt” and “darkie-lover”.

Without knowing who they were, a 21-year-old woman tried to get the three men to stop harassing the drunk. She was then called a “little whore” by Almqvist.

When the woman came forward last week and Expressen confronted Almqvist with the allegations against him, he denied everything. On Wednesday morning, after Expressen published the footage, the party leadership called a crisis meeting.

“We will be making a comment later today, that is all I have to say,” spokesman Martin Kinnunen told news agency TT.

According to political scientist Johan Martinsson from the University of Gothenburg, an expert on political rhetoric and the behaviour of politicians, Almqvist is unlikely to be able to stay on as an MP.

“The comment about the ‘little whore’ is enough in itself really,” Martinsson told TT.

“That he denied saying any of this doesn’t make it any better. His situation is bad enough as it is, but perhaps he would have been helped by an explanation and by lying low for a while, but even that is not very likely.”

The footage was published only a month after Sweden Democrat head Jimmie Åkesson, in a letter to all party members, declared that the party was enforcing its zero-tolerance policy against racism.