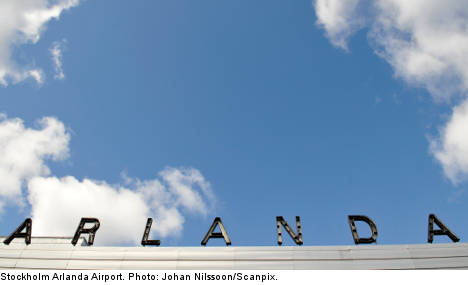 The already delayed plane was just about to depart when a 41-year-old man from Gävle in central Sweden reportedly came running towards the gate, shouting “I’m getting on that plane!”

When a Scandinavian Airlines staff member told the man that it was too late to board, he said, repeatedly, that there was a bomb on the plane.

The pilot was told to stop the plane and police were called.

While waiting for the police to arrive, the man threatened to call the Aftonbladet newspaper to tell them there was a bomb on board an SAS plane and that he was not being allowed to catch his flight.

Asked by the police whether he realized the seriousness of issuing a bomb scare, the man replied that him not being allowed on the plane was just as serious.

When the police told him he would not be travelling, the 41-year-old pointed at the plane, which was returning to the gate, and said that he would be getting on it.

But instead of holidaying in Malta the man got to travel to a police detention centre in Stockholm.

During questioning he said that he was a diabetic and was not quite sure what he was talking about.

The plane was evacuated and searched and the passengers were transferred on to a different plane before finally leaving for Malta over two hours late.

Nine passengers missed their connecting flights as a result and had to spend the night in a hotel.

One passenger was treated by medical personnel after experiencing breathing difficulties.