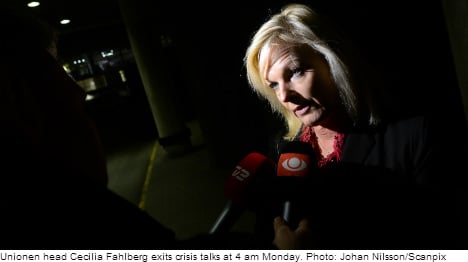 “As an SAS stakeholder, the Swedish state has pulled the rug from under the Swedish model despite the government saying it is in favour of it,” Unionen spokeswoman Louise Gerdemo Holmgren told The Local.

“It’s the equivalent of us going on strike without talking to the employers first – it’s unfathomable,” said Gerdemo Holmgren.

“Our members are loyal and want to keep flying but there is a lot of anger.”

Union representatives flew down to Copenhagen a few days later for crisis talks. The @Unionen Twitter account published a photograph of a bare office space and said some of their representatives had slept on the floor.

Other observers have reacted to the short space of time that the unions have had to respond.

“After all, they did agree, and both parties are taking responsibility, yet at the same time one can question negotiations that take place under such time pressure,” labour market historian Sofia Murhem at Uppsala University told The Local.

She said the negotiations were unusual but pointed out that the Swedish model had evolved over time.

“In the fifties and sixties, unprofitable companies were supposed to go bust. Then the workforce could relocate either to other companies or to other industries. It was also meant to regulate quality on the market,” she said.

“Union economists pioneered that model despite some Social Democrats deeming it controversial.”

She said there were other “model-breaking” deals struck in the recent past.

In 2009, employers and the metal union IF Metall, then headed by current Social Democrat leader Stefan Löfven, struck a bargain to reduce costs. Instead of lowering salaries, employees agreed to scale back their working hours while the financial climate recovered.

“That kind of compromise from both parties more accurately defines the Swedish model,” Murhem told The Local.