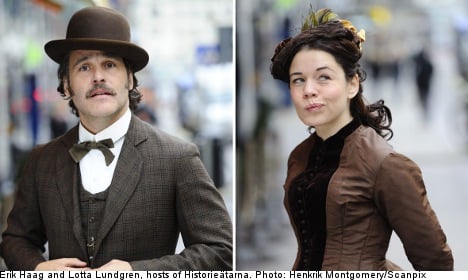 Setting off in the 1650s, the series takes viewers and their taste buds on a virtual journey ending in the 1970s, offering up copious culinary delights and historical nuggets along the way.

The Local: Do you see this experience as a culinary trip into history?

Lotta Lundgren: No I don’t. It’s a trip in time and my mission is to express how a person could have felt from eating this kind of food and living this lifestyle. I can eat good food whenever, but this food I only have the chance to eat once in a lifetime!

TL: Which was your favorite era?

LL: Oh, that’s difficult to say. It’s been easier to relate to the eras closest to our time. I was born in the seventies, my parents were born in the forties and my grandparents in the twenties. But If I had to choose an era to live in, I’d choose today’s.

TL: What was the most outrageous thing you did during the series?

LL: There are too many things to choose from. I think the craziest thing I did was to claim I could ride a horse, even though I couldn’t. But to impress our producer, I rode a small four-year-old horse that had been indoors all day and was about to explode.

We were going to film me galloping a few metres and the photographer sat in the trunk of a car. When we got the green light to start filming, it took five seconds for the horse to run past the car, but then it continued for five kilometres and in some weird way – I managed to stay on the horse.

TL: You drank only beer and moonshine to stay true to the era. How did that feel?

LL: You get used to it! Starting your day with a big brew seems less outrageous than not doing it.

I think it’s important to add that people 100 years ago would have had a tough day if they didn’t start it with mild inebriation. They dealt with poorly healed broken bones, concerns about the food quantity, the cold, the anxiety. As well as constant worrying about the sick, the dying or the already dead children.

I allow our ancestors every drop!

TL: How about the 1650s? What was normally served during dinner in that age?

LL: It would be very rude for a dinner host to serve less than thirty dishes during a meal. The most important factor was that the food would be entertaining, and would stimulate fun conversations.

One has to remember that neither TV, cinemas nor the internet existed – instead, dinner became this big festive theater where crazy food such as roasted and perfumed swans decorated with jewellery could be served. The goal was to make the dinner as memorable as possible for the guest.

TL: How was it to be on a diet based on intestines, rooster heads, and small birds?

LL: Not weird at all. It’s a classic LCHF-diet! After a while it felt natural to start the day off with dried duck with rancid butter. But for those who are not too fond of meat, vegetarianism was also an option. But you can forget about light salads. If you belonged to the poor, you more or less lived off of rye, turnips and peas.

Had the poor been given the opportunity to choose, they’d just as easily have eaten as much meat as the aristocrats. But for the aristocrats to have chosen to add vegetables to a meat-based dinner would probably have seemed rather suspect.

Historieätarna airs at 9pm on Thursdays on SVT1