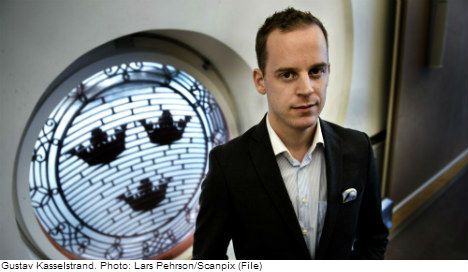 “I am disappointed. Having a different opinion is not the same as being disloyal,” Kasselstrand told the daily newspaper Svenska Dagbladet (SvD).

He has previously been criticized within the party for writing an opinion piece where he argued the need to recognize a Palestinian state. This time, he publicly defended former spokesman on economic policy, Erik Almqvist, saying he should have been allowed to stay on.

“It is a shame I can’t write a critical piece without losing my job. Our business is politics and politics is about people having different views,” he told SvD.

The party also got rid of the deputy head of the party’s youth group, William Hahne, after he criticized the party, which Kasselstrand said points to it being impossible to voice a different opinion than that of the party.

Despite this setback, however, Kasselstrand told the paper that he will continue to “hold his head high”.

“I will continue to work for continued growth for SDU. Our long-term goal is the same: to make the Sweden Democrats the biggest party in the school elections in 2014,” he told the paper.