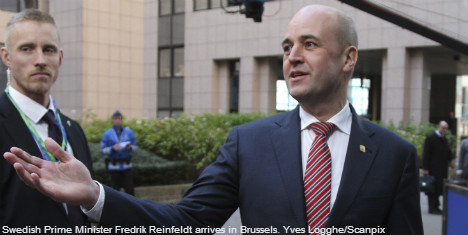 “I don’t feel we’ve got a proper explanation to why this latest proposal means our position worsens compared to other net contributors,” Reinfeldt told Swedish news agency TT as he arrived in Brussels on Thursday for EU budget talks.

He accepted that Sweden’s fee would go up as the country’s finances are more robust than many of its European neighbours.

Sweden has long been a ‘net contributor’ to the union, giving more cash than it gets back from the European budget.

At the same time, Sweden is one of five countries that have a discount on its EU fee.

This year, Sweden will dish out more than 32 billion kronor ($4.79 billion). Without the discount, however, the fee would be 10 percent higher.

The current debate about the long-term EU budget has proven contentious on many national fronts.

British Prime Minister David Cameron has said he will defend the UK discount and wants “a good deal” for his taxpayers.

Austria, The Netherlands and Germany also have discounts.

Denmark does not have one but Prime Minister Helle Thorning-Schmidt is threatening to veto any final deal if her country is not offered a one-billion Danish kroner discount.