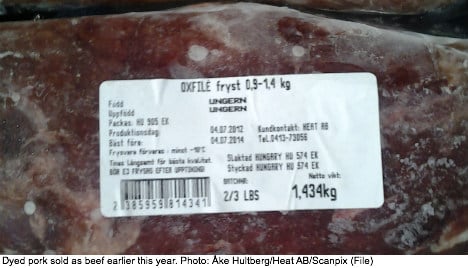 “We see the same trend all over the country, not even one in two put trust into how meat is handled,” analyst Jon Andersson of polling firm Sifo told the daily Svenska Dagbladet (SvD).

Women were more likely to be distrustful than men – 56 percent of female respondents to the survey lacked faith in the meat industry, while 47 percent of men said the same.

Sifo pointed out that women usually do the food shopping for their families.

A few years ago, polls showed that Swedes were quite trusting in comparison to their EU neighbours when it came to food.

Jan Bertoft, director of the Swedish Consumers’ Association (Sveriges Konsumenter), thinks trust must be restored by beefing up inspection procedures for both wholesalers and retailers.

Most of the dyed meat out in the stores came from the Coop grocery store chain, but consumers have also reported in cases from Ica and Eurocash stores.

“I don’t understand how a big and serious player like Coop didn’t raise the alarm much earlier,” Bertoft told SvD.

So far, meat wholesalers Heat, Barterinvest and CKA Chark have been reported for the scam.

They sold about 350,000 portions of fake-beef, according to SvD’s calculations, much of which went out to restaurants.

The revelation sparked a political debate about who should be responsible for checking the supply chain.

At present, municipalities carry out inspections, but critics say the process should be centralized for greater oversight.

“It means you’re left to question the quality of other products,” said Bertoft.

“What is actually in that sausage?”