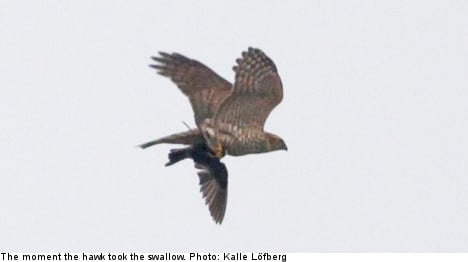 “Someone shouted ‘No! No! No! No!’ and then everything went quiet,” veteran birdwatcher and avid photographer Kalle Löfberg told The Local.

On a grey and windy morning this week, 66-year-old Löfberg gathered with 50 eager birdwatchers and witnessed what turned into a shocking midair hunt.

The crowd had been growing for three days after someone noticed the rare swallow, which according to Löfberg, has never been seen in Sweden before.

However, things took a turn for the worse when the small bird got exhausted flying against the wind.

“I was watching the whole thing through my camera,” explained Löfberg.

“Someone shouted ‘There’s a sparrow hawk’ but I thought it was far away. And then, the sky was empty.”

The 66-year-old then looked through his pictures and noticed he had caught the exact moment of the kill through his own lens.

The hawk took its prey to a nearby beach where Löfberg claimed that the swallow had no chance in surviving.

Löfberg, who has been an avid bird watcher for 40 years, had never seen anything like it.

“I was so surprised. It’s one of the rarest birds you could ever see in Sweden,” he said.

The American Cliff Swallow is migratory, usually flying from its home in North American to South America each year.

The birds very rarely have been known to migrate to western Europe, however, having only been spotted in Europe ten times, according to the Aftonbladet newspaper.

Some have speculated that hurricane Sandy on the east coast of the United States may have caused the bird’s unusual appearance in Sweden.