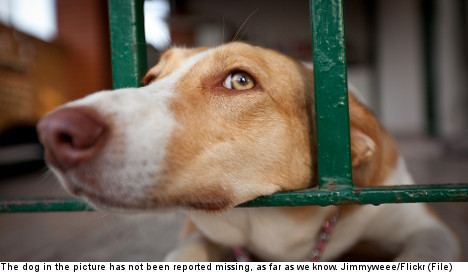 “We’ve all had it, a dog that’s run away. You don’t know where to go or who to talk to,” Tomas Söderberg, the founder of the group, Missing Dog, told The Local.

A dog-owner himself, Söderberg emphasized the feeling of helplessness when a dog goes missing, and that people in his hometown Linköping were eager to lend a hand.

“The idea of Missing People is that many people work together to help one another. Through Missing Dog, we want to bring together different groups of people from the county to get one big group,” he added.

“With the success of Missing People, it was easy to come up with the name Missing Dog.”

Considering the group has only existed for five days, no search parties have yet been organized for missing dogs, yet Söderberg explained that he had already received many calls as well as Facebook pleas.

In the five days since he launched the project, the official Facebook group accumulated over 1,000 members. To Söderberg’s surprise, members from other counties around Sweden even joined – some as far away as Norrland.

While Söderberg admits that he personally can’t lend a hand to those in other counties, he suggests that people should start similar groups nationwide.

“We can understand how all these people feel and that’s why we work together,” he said.