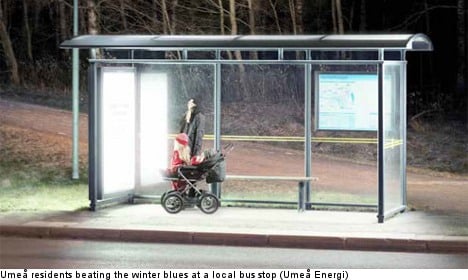 “We wanted to show we care about the people living here in Umeå at this dark time of the year, people get depressed if they don’t see the light,” Umeå Energi CEO Göran Ernstson told The Local

Umeå, which lies some 500 kilometres north of Stockholm, is only light for around five hours a day at this time of year. Into December, as the temperature plummets, this figure shrinks by an hour.

The snow has not yet settled, and as a result the city is even darker than usual, something the energy company wants to fight artificially.

“Umeå residents both own us and are our customers and we believe we all need to be re-energized when it gets like this,” Ernstson continued.

“Even though it snowed today, the sun had set by 2pm. People need to get their vitamin D somehow!”

The energy company boasts that the energy used to power the lamps comes from renewable sources such as solar, wind, and hydropower.

In addition, the lights filter out harmful UV rays, preventing potential eye and skin damage for those standing beneath them waiting for the bus.

However, not everyone in Umeå is beaming with the new additions to the bus stops.

Local resident Tomas Helleborg claims the lights are so dazzling that it’s almost a struggle moving past them.

“The light is quite bright indeed and directed to the street outside the bus-stops, and I don’t really like them,” he told The Local.

“They’re simply too bright when you’re biking or driving past in the dark!”

Light therapy is a known treatment for Seasonal Affective Disorder by compensating for lost sunlight exposure and resetting the body’s internal clock.

Also known as heliotherapy and phototherapy, it can be also used to treat skin, sleep and psychiatric disorders.