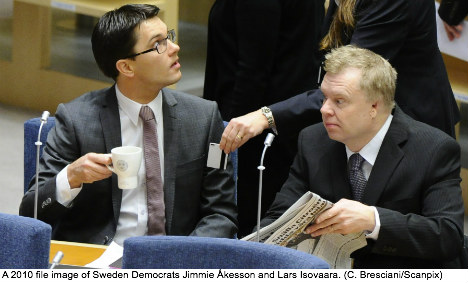 Isovaara’s version of the story was put in doubt when tabloid Expressen revealed a new timeline of events.

They report that Isovaara called the police at 2.30am on Wednesday to report being robbed, allegedly by two “unknown, immigrant-background men”, in an encounter that made him fall out of his wheelchair.

Isovaara had been on his way back to his overnight quarters at the Swedish parliament building from a restaurant. Staff there told Expressen they had found his bag at 2.10am, a full 20 minutes before the alleged robbery.

Police called to the scene then witnessed Isovaar “making pig noises” and “spitting in contempt” at the guard, who reportedly had an immigrant background, prompting the officers to report the MP for racist abuse.

The party quickly sprang to Isovaara’s defence, saying the witnesses must have mistaken his sobs for grunts.

As news of the bag find broke, however, they altered their tune.

“If it turns out we have been mislead about the incidents there will naturally be consequences,” said party leader Jimmie Åkesson when faced with the new information.

The anti-immigrant party has been under relentless scrutiny lately after a video showed three of its young hotshot politicians hurling racist and sexist abuse at passers-by during a night out in Stockholm.

Despite the media coverage, the party continues to perform strong in voter opinion polls.

A new opinion poll released on Thursday by TV4/Novus show the party now has support of 8.6 percent of the electorate, a 2.1 percentage point rise since the last Novus poll in October.

New supporters are found primarily in Stockholm and among the elderly.

The pollsters claim most of the demographic are voters who have abandoned the Moderate Party and the Social Democrats.