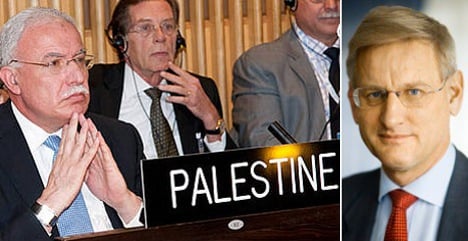 Sweden’s Foreign Minister Carl Bildt announced the decision on his blog but was quick to underscore that Sweden does not recognize Palestinian sovereignty.

“It should be seen as supporting a two-state solution and for the efforts to initiate concrete negotiations to reach it,” he wrote.

“This is an important upgrade.”

Bildt expressed regret that, despite best intention, the European Union was unable to reach a common position on the matter as “voting yes on such a matter proved itself impossible to achieve”.

Sweden was one of only 14 nations that blocked Palestinian membership to UNESCO in 2011.

The vote on Thursday will set Sweden up against the wishes of the United States and Israel as the UN General Assembly meets in New York.

Bildt earlier in the year said he had tried to dissuade the Palestinian leader Mahmoud Abbas from asking the United Nations to revise the status.

“The main aim right now is to stimulate the two parties to a dialogue. That’s what we are supporting,” Bildt said as late as January.

The only other country with a similar observer status is the Vatican.

A Palestinian attempt to gain full membership last year found no support in the UN Security Council, where the permanent members all have veto rights.

To be upgraded to observer status a simple majority in the Assembly is required.