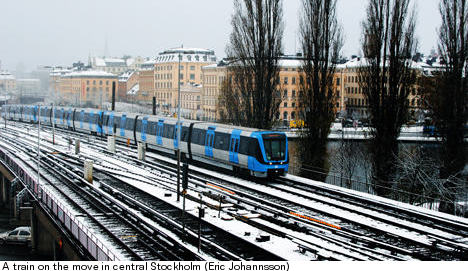 And the Swedish Meteorological and Hydrological Institute, SMHI, says the cold is here to stay, although the snowfall may ease by the weekend.

“Central Sweden might reach above zero in the daytime next week but temperatures will mostly stay below freezing point,” Anna Hagenblad at SMHI told The Local.

On Saturday, northern Sweden will see temperatures dip down to between minus 12 and 20 degrees Celsius.

“It’s hard to tell exactly how cold it is going to be, since there might be some local fluctuations,” said Hagenblad.

So far, the snow hasn’t caused any of the troubles Swedes have grown accustomed to.

Swedes are used to the country descending into commuter hell as the first snow falls.

Delayed and cancelled trains have riddled previous winter, but this week has been problem free, so far.

“We haven’t had any problems,” Dag Rosander at Sweden’s national rail operator SJ told The Local.

“Everything is going smoothly. Nothing to report.”

The only negative outcome of the snow so far may just be that people don’t like it.

Or as one angry and anonymous pedestrian told The Local: