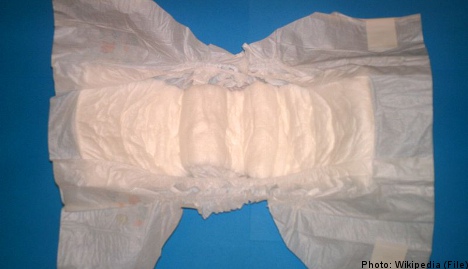 The 32-year-old was convicted on Friday by Blekinge District Court of making a false accusation. He has previously been removed from his job.

The story began when the 32-year-old came up with an elaborate idea to play a prank on a colleague who was celebrating his 30th birthday, according to a report in the Expressen daily.

He knew that his colleague was planning a trip to Germany to buy cheap booze for his planned party in Malmö and so the man conjured up a plan to hinder his return.

Stating that he was calling in an official capacity, the 32-year-old put in a call to the Swedish Customs (Tullverket) and reported that the birthday boy was planning to smuggle amphetamines into Sweden.

Customs officers took the call seriously and stopped the man’s vehicle as he was crossing the Öresund bridge heading for Malmö.

The officers however found no trace of illegal narcotics in the vehicle, discovering only a soiled diaper that the 32-year-old prankster had placed under the bonnet.

Unwilling to see the funny side in the elaborate caper, customs officers contacted their colleagues at the coastguard in Karlskrona to report the man.

The man’s employers also declined to see the humour in the episode and pressed charges, criticising the 32-year-old’s “extremely poor judgement”.

Prior to the court case, the man had reached an agreement that it was best that he be relieved of his position. This agreement meant that he avoided an additional sentence of community service.

During his trial, the 32-year-old told the court that he had seen the error of his ways and blamed his poor judgement on alcohol consumption.