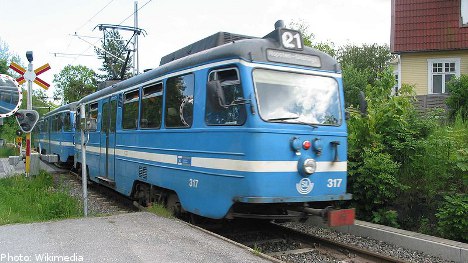 The man, who is in his thirties, was run over by a local commuter train by Baggeby station at around 11.30am on Saturday.

“It seems that it is a man who was under the influence who had fallen down onto the tracks. Members of the public had previously helped him back up but he had landed on the track again,” said Sven-Erik Olsson at Stockholm police to the TT news agency.

According to witnesses the man fell onto the tack several times.

“The young man stumbled around and fell down onto the tracks, so we lifted him up and put him on a bench. Then he fell again after a while and we helped him back up,” said a witness to the Aftonbladet daily.

The man told the newspaper that he then heard a scream and turned around to see that the man had been run over by the train.

“The members of the public came to the conclusion that he was inebriated, but there could be another explanation,” Sven-Erik Olsson said.

The man was taken to hospital and is reported to have sustained serious injuries in the incident.