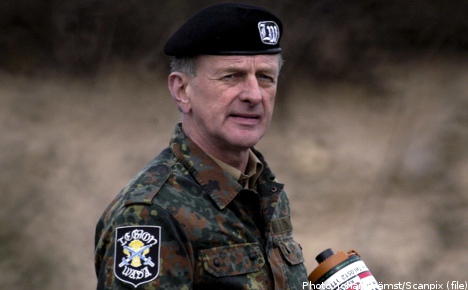 “It is extremely unfortunate that someone who represents completely different views gets in on the Sweden Democrat ticket,” party spokesperson Martin Kinnunen said to Sveriges Television.

“He has been made very aware that party believes that he should resign.”

69-year-old Carl Linusson has previously been a member of the now defunct National Socialist Front (Nationalsocialistisk front – NSF), an openly Nazi party which was formed in 1999 to coincide with the 110th birthday of Adolf Hitler.

Linusson won the seat on the council to replace the Sweden Democrat Christian Wallin after six people wrote his name on SD election ballots and the party had no other replacement.

Linusson however does not intend to represent SD and will instead push the agenda of the Party of the Swedes (Svenskarnas Parti) which was founded in 2008 by members of the NSF.

The party gained attention after the 2010 election when it won a seat in Grästrorp municipality, making it the first National Socialist party to win representation in a Swedish political assembly since the end of the Second World War.

Party leader Daniel Höglund held the seat for only a few weeks before it was established that he was disqualified because he was not registered as a resident in the municipality.

For the same reason Christian Wallin can no longer represent the Sweden Democrats on Lidköping municipal council after he decided to move.

Curt Linusson has meanwhile stated that he has no intention of succumbing to the Sweden Democrats demand and will formally sit as an independent.

In an interview with the Expressen daily, Linusson described himself as a “nationalist”.

“I have never been a real Nazi, one could say. When it comes to Nazism and National Socialism, I suppose I m a part of that, but I am a nationalist. I don’t want Lidköping to become an immigrant ghetto,” he told the newspaper.

Linusson is credited by the newspaper with having started the Legion Wasa paramilitary organisation in 1999 and having signed up to fight in Iraq in defence of Saddam Hussein in 2003.

In 2005 he was convicted of hate speech after he carried a swastika during an NSF demonstration.

The only step which remains before Carl Linusson can claim the SD seat on the council is the formal approval of the county administrative board’s legal unit.