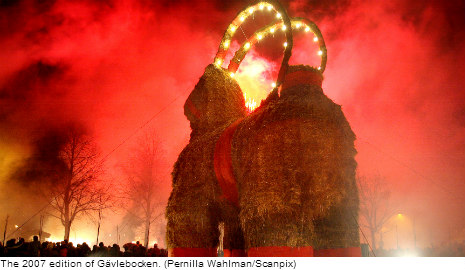 “Someone already tried on Saturday,” Wellington Ikuobase, who was elected Gävle Resident of The Year and christened this year’s goat, told The Local.

In recent years, Gävle’s Christmas goat has been a popular target for arsonists and vandals, who have taken it upon themselves to try to torch the towering holiday display.

And this year proved no exception to the ongoing cat-and-mouse game, with would-be arsonists almost setting the goat alight before local residents had a chance to celebrate they straw animals unveiling.

“The front hoof smells of petrol,” event organiser Eje Berglund told the crowd that assembled on Sunday for the official inauguration.

The goat’s official blog also contained a first-hand account of the ordeal in a post published on Sunday.

“Inauguration day and my birthday! Wow, what a day!” the goat wrote.

“My day started very early when it all of a sudden got very hot around my legs. Thankfully a heroic passer-by saved me!”

Gävle first erected the straw sculpture in 1966, meaning this weekend was the goat’s 46th birthday, to be exact.

“I think the goat is quite cute,” Chinese student Fan Yingxing told local paper Gefle Dagblad (GD). She was at the opening ceremony taking photographs to send home to her family.

“It’s such a symbol of Gävle.”

Gävle Resident of the Year, Wellington Ikuobase, agrees with her.

”The goat is Gävle, it’s something that reminds us that Christmas is on its way,” he told The Local.

He remained undeterred by the historic string of arson attacks that not only have claimed the goat but made it famous across Sweden and beyond.

“Without the goat there is no Christmas.”