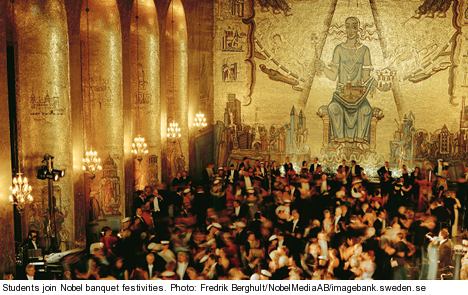 From a historical perspective, the city, and its high seats of learning have developed hand in hand and the fact that the two are tied so closely has been of mutual benefit and significance ever since the prizes were first awarded.

Sweden has a long and proud history of academic excellence, with universities dating back to the 15th Century.

Stockholm University itself was established as a University college as early as 1878, eventually to gain full university status in 1960. Thanks in part to Alfred Nobel, its importance gained momentum in the early 1900s.

“One of the main external factors in Stockholm’s success is the connection with the Nobel Prizes,” says Stockholm University history professor Lars Nilsson.

At the university itself, Nobel forms one of the busiest and most significant highlights of the annual calendar.

A series of events are held each year, culminating in the ceremony itself and the social highlight of the year, the post Nobel-Fest party.

Although the ceremony doesn't take place until December 10, Stockholm University’s involvement begins much earlier, playing a key role in the committees appointed to decide the winners of the Nobel Prizes, as well as the Economic Sciences Award.

The complex process of choosing Nobel Prize winners in chemistry, physics, and economics is carried out by three committees at the Royal Swedish Academy of Sciences, with the secretaries of the Committees of Chemistry and Physics Prizes both professors at Stockholm University.

Astrid Gräslund, a Professor at the Department of Biochemistry and Biophysics, is secretary of the chemistry committee, while Professor of Organic Chemistry Jan-Erling Bäckvall, is also a member.

Gräslund is fully aware that Nobel week has much more than merely a historical significance for the capital.

“December 10 is perhaps the one day of the year when Stockholm is in the spotlight more than any other, from the international journalists to the limousines out on the streets. It really feels like an extra special occasion for the city and the people,” she says.

The Secretary of the Nobel Committee for Physics, Professor Lars Bergström works at Stockholm University's Department of Physics. Meanwhile, four university researchers are members of the Committee for the Prize in Economic Sciences in Memory of Alfred Nobel.

Furthermore, Johan Rockström, Professor in natural resource management was also appointed Chair of the Nobel Laureate Symposium in 2011. Rockström, who is also Executive Director of Stockholm Resilience Centre, is an internationally renowned expert on global sustainability issues and was awarded 'Swede of the Year' in 2009 for his work on climate change.

And Ariel Goobar, another professor from the university is part of the research group led by Saul Perlmutter, the Nobel Laureate in Physics for 2011.

With so many links to the prize committees, it is little wonder why Stockholm University takes such pride in its Nobel links.

Once the names of the Laureates have been chosen, preparations begin for the ceremony itself and a whole host of events around the awards begins.

Every year prizewinners hold a lecture in the Aula of the university, which will take place this year on December 8. “It is a huge thing for the university, both for its own reputation, as well as for current students,” says Astrid Gräslund.

“The Aula can hold some 1,000 people, so it gives the students and lecturers from the university the chance to hear the lectures and feel part of the event. It is certainly one of the highlights of the academic year for many who study here.”

This year’s Nobel Prize Laureate in Literature, Mo Yan, will visit Stockholm University and read excerpts from his work in the Aula Magna.

Yan, who in addition to his novels has published numerous essays and novellas is one of China's foremost writers, whose work is often compared stylistically to the likes of William Faulkner and Gabriel García Márquez.

For those wishing to attend, the event takes place on December 9 and after his readings Mo Yan will answer questions from the audience.

Last year's literature prize honour went to Tomas Tranströmer, a Stockholm University alumni and the first Swede in 40 years to be awarded the prize, who also made an appearance.

Tranströmer joined a small and exclusive group of academics with connections to the university to be honoured.

The first was Svante Arrhenius, who took the 1903 Nobel Prize in Chemistry, the first of four Swedes to take the prize; Hans von Euler-Chelpin won in 1929, George de Hevesy 14 years later, and in 1995, Paul Crutzen’s Nobel award came for his research on the ozone layer in the atmosphere.

Beyond chemistry, the Economics Prize was awarded to another former Stockholm University student, Gunnar Myrdal in 1974, for his work in monetary and economic theory.

But Nobel is not all just about academic achievements for Stockholm University. Each year the students get the chance to take part in the Nobel Nightcap, the traditional post-ceremony party.

The original idea for the party came about in 1978, when one student felt that festivities ended far too early in the evening, considering the profile and significance of the event and the banquet.

It has become an integral part of Nobel week and an unmissable memory for all who take part.

It rounds off what is a highlight for all those studying in the city, and Stockholm’s chance to once again show the rest of the world why it has such a sky-high reputation.