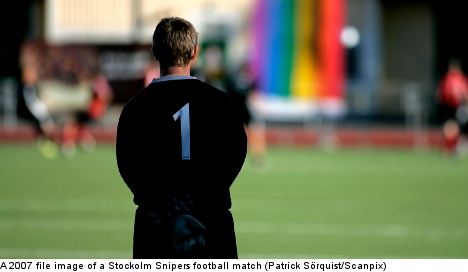 “We distance ourselves from all insults. Clearly it’s damaging for the club to have players who don’t follow the rules,” Ketil Torp, chair of the Sörskogens IF football club, told Sveriges Radio (SR).

The incident took place during a Division Seven match played earlier this autumn between Sörskogens IF and the Stockholm Snipers, a club which makes an effort to welcome lesbian, gay, bisexual, and transgender (LGBT) players.

During the match, players from Sörskogens were heard saying “you suck cock for 50 kronor”, “all of you have HIV”, and “we’re probably going to get infected”, among several other homophobic remarks, the local Mitt i Huddinge newspaper reported.

“It was a little unpleasant when we went into the dressing room after the game. One of our players was also threatened after things got a little heated on the pitch,” Snipers coach Christoffer Smitz told SR.

Following the incident, Sörskogens IF was fined 5,000 kronor ($755) by the Stockholm Football Association, which also demanded that top club officials attend a training course.

The sanction marked the first time the Stockholm Football Association had penalized a club for homophobic behaviour during a match, according to SR.

However, club leadership went one step further this week, deciding to sack all the players on its top team.

“We had no choice but to suspend the entire team. That kind of language isn’t appropriate for football or anywhere else,” club chair Torp told Mitt i.