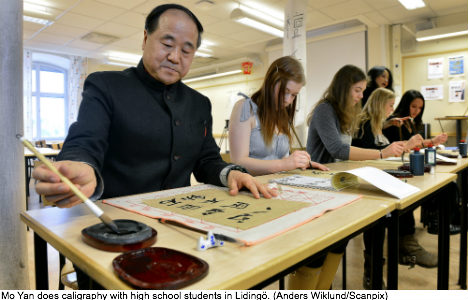 “At first I thought I was the target of the disputes, but over time I’ve come to realize that the real target was a person who had nothing to do with me,” he said.

Romanian author Herta Mueller, the 2009 Nobel literature laureate, has been one of his most outspoken critics.

“No writer has yet appeared, anywhere in the world, who is liked by all his readers; that is especially true during times like these. Even though I would prefer to say nothing, since it is something I must do on this occasion, let me just say this: I am a storyteller, so I am going to tell you some stories,” Mo Yan continued.

The stories he shared with the audience at the Swedish Academy in Stockholm began with a tribute to his mother, recalling watching her being beaten by a watchman in a collective wheat field only to show compassion to the same man years later. He also discussed her approval to visit the local marketplace to listen to a traveling storyteller-an early experience that paved the way for his own future career in storytelling.

“My illiterate mother held people who could read in high regard. We were so poor we often did not know where our next meal was coming from, yet she never denied my request to buy a book or something to write with. By nature hard working, she had no use for lazy children, yet I could skip my chores as long as I had my nose in a book,” the 57-year-old author said.

“It did not take long to find retelling someone else’s stories unsatisfying,” he added.

Dropping out of elementary school, Mo Yan became an animal herder and later worked in the fields. He described these early interactions with rural life as creating a vivid backdrop for his later works.

“Even in my wildest dreams, I could not have envisioned a day when all this would be the stuff of my own fiction, for I was just a boy who loved stories, who was infatuated with the tales people around me were telling,” he said.

In 1984, after a period in the Chinese military, Mo Yan was accepted into the Literature Department of the PLA Art Academy, where he wrote several short stories and novellas, including Autumn Floods, Dry River, The Transparent Carrot, and Red Sorghum. The latter, published in 1987 and perhaps his work best known abroad, is a tale of the brutal violence that plagued the eastern China countryside – where he grew up – during the 1920s and 30s.

Citing fellow Nobel literature laureates American novelist William Faulkner (1949) and Columbian writer Gabriel García Márquez (1982) as a major source of inspiration, he then discussed his struggles to find his own literary voice.

“For two years I followed in the footsteps of these two masters before realizing that I had to escape their influence; this is how I characterized that decision in an essay: they were a pair of blazing furnaces, I was a block of ice. If I got too close to them, I would dissolve into a cloud of steam,” Mo Yan said.

“What I should do was simplicity itself: Write my own stories in my own way. My way was that of the marketplace storyteller,” he continued.

He concluded by reiterating that “telling stories earned me the Nobel Prize for Literature. Many interesting things have happened to me in the wake of winning the prize, and they have convinced me that truth and justice are alive and well. So I will continue telling my stories in the days to come.”

Unlike many other laureates who use their literature lectures to provide social commentary, Mo Yan did not, as was expected, mention politics during his speech. At a press conference in October, he mentioned Liu Xiaobo, the 2010 Nobel peace laureate from China who is currently serving an 11-year prison term for subversion after he called for democratic reforms to China’s one-party system.

“I hope he can gain freedom as early as possible,” Mo Yan said the day after the prize was announced.

Mo Yan has attempted to separate his work from politics, saying that his Nobel win was “a literature victory, not a political victory”.

Mo Yan will receive the 2012 Nobel Prize in Literature on Monday, December 10th at the Stockholm Concert Hall.