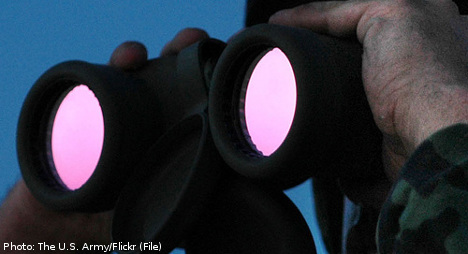 Just two months ago, in October 2012, Swedish Armed Forces chiefs were warned about the presence of foreign spies during a closed-doors meeting in the basement of the military headquarters, reports the Svenska Dagbladet newspaper.

“Espionage against Sweden is a daily occurrence,” said Thornberg, who started his Säpo career in surveillance, observing intelligence officers from Eastern Bloc and intercepting their meetings with suspected Swedish agents.

“In the past, during the Cold War, we were busy looking East but now we also find espionage from other, completely unexpected regions,” explained Thornberg.

“The most efficient method for a foreign power is to recruit a local agent.”

After the collapse of the Soviet Union the number of foreign intelligence officers operating in Sweden dropped and remained low until 2011 when the number increased slightly.

Two months ago, all Armed Forces unit commanders were warned that there were signs of increased espionage activity in Sweden, especially from distant nations.

At the meeting, Stefan Kristiansson, head of the Military Intelligence and Security Service (Militära underrättelse-och säkerhetstjänsten), informed the unit commanders about which foreign powers currently conduct the most comprehensive and aggressive intelligence operations.

Russia, China and Iran have topped the list for a decade, but Wilhelm Unge, Säpo’s chief analyst for counter-espionage, told Svenska Dagbladet that other countries too have an interest in spying on Sweden.

For instance, Sweden sells submarines to Australia, and the Chinese might be interested in details about the technology and performance of those submarines, explained Unge.

“China is building the society of the future and wants to be independent. That creates intelligence needs,” he claimed.

Aside from the trio of states who top the espionage list there are a dozen or so nations that also conduct intelligence gathering in Sweden that are normally regarded as friendly states, according to Säpo.

The purpose of the espionage could be to gather military, political or industrial intelligence.

“There are no real friends, only interests,” said Thornberg.