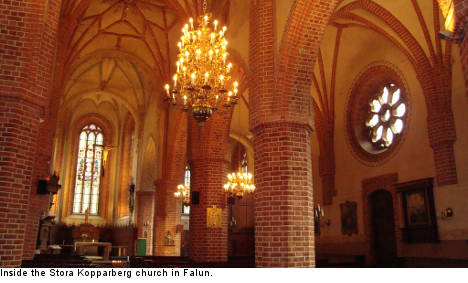 When Susanne Wiklund arrived at the church in Falun in central Sweden where her mother’s funeral was due to take place on Thursday, she was saddened to learn that the church bells were broken.

“I thought, well, these things happen and it’s not the end of the world,” Wiklund told the Dalarnas Tidningar (DT) newspaper.

“But I was completely unprepared for what happened afterwards, when I was told that the planned funeral could not be completed,” she said.

Just before the ceremony was due to start, the undertakers informed Wiklund that the grave had not been dug. Later she also found out that the pallbearers hired by the parish had gone to the wrong church.

Priest Kristina Hyse said she was sorry for what happened but added that the Stora Kopparbergs church, where the funeral eventually took place on Friday, was not to blame for the mess-ups.

“We followed our routines. The grave wasn’t dug because there was a communication glitch from the undertaker. I don’t know why the pallbearers weren’t there. Possibly it was because they misunderstood the information we gave them.”

“If I could have I would have dug the grave myself so that the relatives would not have to go through the experience of having to postpone a funeral,” said Hyse.

Susanne Wikman said that one has to accept a measure of “human error” but that in this case something was completely amiss.

“It felt so undignified that my mother would be sent back and forth when the idea was that she would be able to rest in peace,” she said.

“You just can’t forget to dig a grave when you work with arranging funerals. It causes so much pain for us relatives. It was difficult to be mentally present at mother’s funeral.”