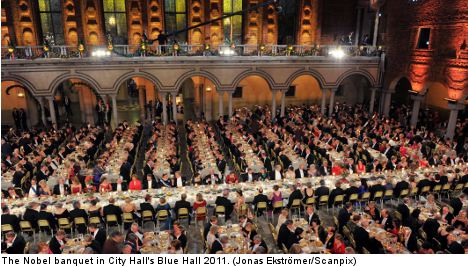 With a few hours left until the prize ceremony and the ensuing lavish dinner at Stockholm City Hall, Swedes are pouring over the details of the event as usual.

Who gets to sit next to one of the princesses usually peaks Swedes’ interest.

This year, chemistry laureate Brian Kobilka will be seated to Crown Princess Victoria’s right, as Mrs Kobilka sits directly opposite the heir to the throne. The Swedish speaker of parliament, Per Westerberg, will flank the crown princess on the left, which he usually does.

The newly-engaged Princess Madeleine, who has returned from her home in New York sans fiancé Chris O’Neill, will be responsible for entertaining physiology laureate Shinya Yamanaka and Swedish Prime Minister Fredrik Reinfeldt. The laureate’s wife Dr. Yamanaka will be facing the younger princess.

Princess Madeleine will have her brother Prince Carl Philip diagonally across from her. He will entertain Dr. Yamanaka and Mrs. Westerberg, a psychiatrist, with Professor Yamanaka facing him.

Seating at the top table strictly follows what is commonly known as the ‘Nobel Order’, which takes into consideration the rank of the members of the royal court and then matches them with the laureates in the order set out in Alfred Nobel’s last will and testament.

Nobel mentioned physics first, meaning that the laureates, this year Serge Haroche and David Wineland, and their spouses are clustered around King Carl XVI Gustav and Queen Silvia. The regent is also always seated near the president of the Nobel Foundation and the president’s spouse, presently Mr. and Mrs. Storch.

“There is a protocol for the seating, but we can make modifications based on for example language abilities,” Nobel Foundation spokesperson Annika Pontikis told the TT news agency.

Literature laureate Mo Yan has thus been seated next to his wife Quinlan Du. Married couples are usually never seated next to each other but the Foundation found it apt to make an exception.

“Neither of them speaks anything but Chinese,” said Annika Pontikis.

The top table takes centre stage in the main hall of Stockholm’s 1920’s City Hall, considered by many an important example of the National Romantic architecture style.

The Blue Hall, which is not actually blue but has walls of exposed brick soaring more than 20 metres up to the ceiling, is most famous internationally for hosting the Nobel banquet, but hosts many other events including ceremonies for immigrants when they become Swedish citizens.