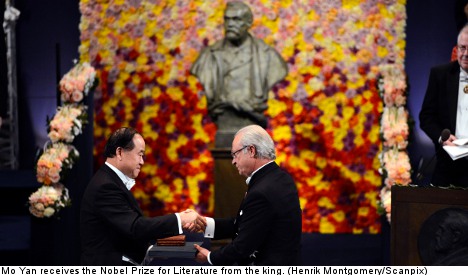 The laureates and guests were clad in white tie and tails for men and evening gowns for women.

The Nobel Literature Prize was handed to Mo Yan, one of China’s leading writers of the past half-century, who was honoured for a body of work that the Swedish Academy said mixes folk tales, history and the contemporary.

Before handing over the literature prize to Mo, Per Wästberg of the Swedish Academy referenced the difficult conditions in the prizewinner’s homeland.

“The brutality of 20th century China has never been described so nakedly,” Wästberg told guests at the Concert Hall, adding that Mo was able to carry an entire human life “on the tip of his pen” before he accepted the prize to a thunderous ovation.

Mo has walked a tightrope during his stay in Stockholm, with some pundits supporting his own claims that he is “independent” and others casting him as a Beijing stooge.

The Medicine Prize was presented to Shinya Yamanaka of Japan and John Gurdon of Britain for work in cell programming, a frontier that has nourished dreams of replacement tissue for people crippled by disease.

Serge Haroche of France and David Wineland of the United States were meanwhile awarded the Physics Prize for pioneering optical experiments in quantum physics that could one day open the way to revolutionary computers.

Two Americans, Robert Lefkowitz and Brian Kobilka, picked up the chemistry prize for identifying a class of cell receptor, yielding vital insights into how the body works at the molecular level.

Finally, US scholars Alvin Roth and Lloyd Shapley collected the economics prize for their work on how to best match supply and demand that has potential applications in organ donation, education and on the internet.

The proceedings began on Monday afternoon once the king and queen arrived with their children and son-in-law Prince Daniel.

Her eldest, Crown Princess Victoria, went for sequins again, swapping last year’s midnight blue gown for one in emerald green, with discrete capped sleeves. She was seated in the front row alongside her parents on stage.

Princess Madeleine, sitting behind her parents, opted for a light grey, strapless gown with discrete, asymmetric pleats on the bodice.

Prince Carl Philip, meanwhile, appeared to have grown a beard. Prince Daniel sported his customary slick-back hairdo, which he adopted after he met the Crown Princess.

The stage itself was also decked out. Behind Alfred Nobel’s bust, the wall was covered with more than 6,000 flowers, this year in pastel pinks and vibrant yellow.

For the past 40 years, a florist in the Stockholm suburb Hässelby has taken responsibility for the flower arrangements.

Yet this year’s ceremony risked being slightly less lavish than in previous years, as the financial crisis has tentacles reaching as far as the Nobel Foundation.

This year’s festivities are costing 20 percent less than in 2011, having been shrunk from 10 million kronor ($1.5 million) to 8 million. But the budget should not affect the quality of the party, as most contractors have given the foundation a discount.

“Most of them have been prepared to give us a helping hand for this to continue,” Nobel Foundation head Lars Heikensten told the TT news agency.

As the award ceremony drew to a close accompanied by music composed by Hugo Alfvén, and once the royal family had exited the stage, the laureates’ spouses, children and grandchildren flooded the stage to celebrate together.

The Nobel Prize consists of a gold medal, a diploma, and eight million kronor, to be shared if there is more than one recipient.

The laureates were also to be honoured at a formal dinner banquet later in the evening attended by the royal family and some 1,300 specially-invited guests.

Earlier Monday in Oslo, the Nobel Peace Prize was awarded to the European Union for turning Europe “from a continent of war to a continent of peace,” a contested choice of laureate as the bloc faces its worst crisis in six decades.