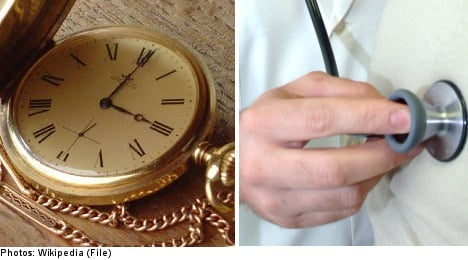 There is a surprising lack of constructive debate regarding the future of the Swedish welfare state. At least this is the case when it comes to the Achilles’ heel of the publicly funded systems, namely long waiting times.

Sweden indeed has high welfare ambitions. But the system cannot live up to the promises of equal access, safety, and efficiency since many have to wait weeks, months or even years to take advantage of various public services.

As discussed in my new book I väntan på välfärden (‘Waiting for welfare’) it is possible to improve the system considerably, by focusing on constructive and pragmatic reforms.

A few years ago Kjell-Olof Feldt, former Social Democrat finance minister, talked of his own personal experiences of the healthcare system.

The reason for the mistrust, according to Feldt, as welfare had begun rationing services through queues, resulting in that long waiting times.

Indeed bureaucratic delays characterize a number of areas of welfare in Sweden. Many have to wait for months or years for operations that could improve their quality of life dramatically.

And those who reach out to the elderly care system in the final stages of life can be forced to wait.

In the average Swedish municipality, the wait time for elderly care is almost two months. In some parts of Sweden elderly in need of aid have to wait on average 150 days.

Behind the statistics lies an even more disturbing reality. Municipalities do not like to report long waiting times. Therefore officials can delay the process of actually registering applications for elderly care, as well as other welfare services.

Waiting times for welfare services reduce the security that the high taxes in Sweden ought to create.

Interestingly they also recreate the inequality that tax-financed systems aim to decrease. International research shows that those with higher education in Sweden, those who are better at pushing their will through when in contact with the cumbersome bureaucracy, wait only half as long in the publicly funded healthcare lines as those without any post-secondary education.

Long waiting times exist in most public systems, including social safety nets. Of those who requested assistance for sickness insurance in 2010 for example, fully six percent waited more than 180 days for the public bureaucracy to reach a decision on whether they were entitled to coverage or not.

Surprisingly, 2010 was an exceptionally good year. Five years earlier, almost a third of applicants had to wait more than six months for the bureaucrats to answer!

Even those seeking unemployment benefits and social assistance can wait for weeks and months.

Waiting times are not explained by a lack of resources in welfare systems. Every year, the Swedish state gathers some 170,000 kronor ($25,400) in tax revenues for each citizen. And total tax revenues have grown rather than diminished despite tax cuts pushed through by the centre-right Alliance coalition government.

So there is plenty of money in the system, so why the long waiting times?

Part of the answer can be explained by inefficiencies in government systems. Another key explanation is that when publicly financed services are launched the demand for them tends to increase to higher levels than originally intended. Since the participants pay nothing or very little for the services, demand increases over supply.

The point of the welfare state is to balance supply and demand by judging who really needs a particular service, such as healthcare, and who is over-utilizing the system. However, politicians and bureaucrats are not good at this task.

The solution therefore becomes allowing long queues to develop. Many who wait will get tired and stop seeking aid. And the demand for services will decline due to the expectation of long waiting times.

Long waiting times not only reduce the benefits of various welfare systems, but they also create massive economic costs. For example, patients who wait for healthcare are less likely to get rehabilitated and back to work, increasing their risk of becoming permanently dependent on public benefits instead. Their health might also deteriorate while waiting for care, which in turn increases the costs of healthcare once it is given.

Research and experience shows that it is possible to reduce the problem considerably, as long as the willingness for change exists.

Although the public system as a whole is hampered by long waiting times, specific budget areas benefit by creating ques. For example, a local hospital can reduce expenses by having patients wait in line. The direct cost of waiting almost always lands on the citizens themselves rather than the public system.

To pave the path for improvement, the roles ought to be reversed. When parts of the public system create long waiting times, they should directly bear the cost, for example by being fined when doing so.

Waiting times arise mainly due to central planning and public monopolies. One advantage of having privately-owned players in the welfare system is that they directly benefit from offering various services to patients, and therefore have an incentive to reduce waiting times.

Recently a survey was conducted of a reform in the Stockholm region which increased patient’s choice. The reform, which included the establishment of more private alternatives, was shown to lead to significant efficiency gains.

Thus, more healthcare was made available without raising costs. And patients with high healthcare needs increased their utilization.

Besides opening up for more competition from private players and fining the public system when unreasonable waiting times arise, it is important to clearly establish what rights citizens have.

If a municipality does not give a patient treatment in time, they should have to pay for alternative care that sought elsewhere, even abroad. Such a system already exists in health care, but is rarely utilized.

The healthcare guarantee in Sweden means that a patient can wait 90 days for seeing a specialist and an additional 90 days for the actual treatment to take place. Only after this contract has not been fulfilled can you seek help abroad – 180 days after initially seeking treatment.

In neighboring Denmark, by contrast, patients only have to wait one month until the limit of the healthcare guarantee has been reached. After that they are given the right to choose alternative treatment in public, private and foreign hospitals, to be paid for by public means.

Guarantees can also be extended to other parts of the system, such as applying for sickness benefits or unemployment benefit. After a patient has waited for two months, for example, the systems should be forced to automatically entitle him or her to compensation until the benefits application is actually reviewed.

The public sector should bear the cost of excessive waiting times, and the citizens should be given the opportunity to choose alternative solutions.

By adapting this approach, whilst opening up for more private competition, it would be possible to radically reduce the waiting times and thus clearly improve the welfare services offered in Sweden.