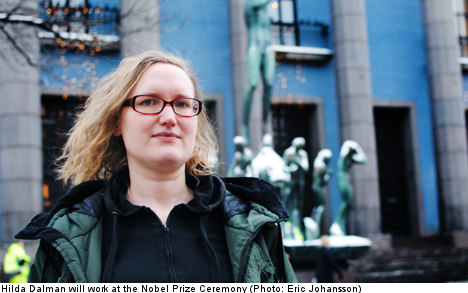 Hilda Dalman is one of them.

Dalman works at Stockholm University’s Student Union (SUS) as ‘Övermarskalk’. The title means that it is her job to organize the union’s traditional events, which traditionally includes helping out at the two Nobel ceremonies.

“Tonight, I’ll be handing out the event programmes to the guests, acting as a doorman at the Concert Hall, and flanking the stairs when the royal family descend,” she told The Local a few hours before the awards ceremony began on Monday.

“And that’s basically it for the Concert Hall.”

She drew a breath as she recalled the tasks ahead, and they were not limited to the awards ceremony at Stockholm’s sky-blue Concert Hall.

As the guests head off toward City Hall, her responsibilities will carry her with them.

“I will also flank the staircase at City Hall when the guests of honour walk down to the banquet.”

But that did not guarantee that she would qualify.

Dalman and the other potential Nobel volunteers had to show up on time for each of the four rehearsals.

“They’ll replace you if you show up late just once,” she explained.

If timekeeping was key, not posing a security risk was paramount. All students representatives are checked by the Swedish security service Säpo.

Dalman’s choice of clothes was quite easy: she didn’t have a choice. The student representatives have to follow a strict dress code.

She will also wear a student cap, a blue and yellow sash, and black shoes. None of the representatives are allowed to sport visible and extravagant piercings.

“I think that the people who have tattoos are usually positioned so that the guests can’t spot the ink so easily,” Dalman said.

Apart from the honour of attending, Dalman is one of the volunteers with a reward in sight after the evening’s chores. The Nobel Nightcap…that’s the name of what is probably Stockholm’s most prestigious after-party.

“It’s very exclusive. Basically, you are not allowed in if you’re not a student union member or a Nobel Prize winner.”

When asked which of the recipients she would like to dance with, she smiles and answers “Alvin E. Roth.”

He is the winner of the Nobel Prize in Economics.

“He seems really laidback. Today, at the rehearsal, he showed up in torn jeans and a knitted cardigan. So, of the winners, I would actually like to dance with him the most.”

If Dalman doesn’t get to dance with him tonight, she will get a second chance on Thursday.

It may mark the end of her Nobel duties, but once she is done organizing the unofficial end of the Nobel Week, the Lucia Ball, she might end up taking a twirl with her favourite laureate.

One winner always attends the event, and this year it’s a Alvin E. Roth who will attend.