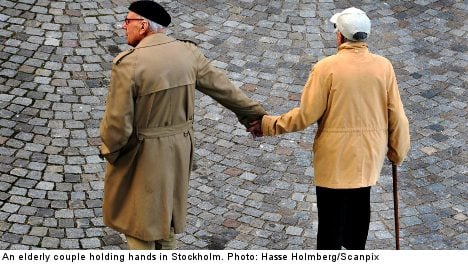 “Income levels differ sharply, depending on when in life one immigrated to Sweden,” Statistics Sweden (Statistiska centralbyrån) noted in its report into the well-being of pension-age immigrants, who account for 12 percent of the 65+ Swedish population.

“Women and those who immigrated at older ages have considerably lower pensions than other groups,” the summary stated.

“Because foreign born persons have lower pensions, they are in need of housing support for pensioners and maintenance support for the elderly,” the report authors noted.

“This particularly applies to those who immigrated later in life.”

Residence patterns also seemed to show that immigrants who came here later in life were lagging behind economically.

They were more likely to live in rented accommodation, while immigrants who arrived at a younger age mirrored the spread of ethnic Swedes between owning a house, owning a share in a flat cooperative (bostadsrätt) or renting (hyresrätt).

a greater extent than men. This particularly applies to foreign-born women,” the report noted.

Looking at leisure, the researchers found that foreign-born elderly were less likely to have a car or the traditional Swedish holiday home than Swedish born pensioners do.

But despite many being car-less, they were still more likely to have travelled in the past year – half of foreign-born elderly had taken a trip while 40 percent of their Swedish born peers had done the same.