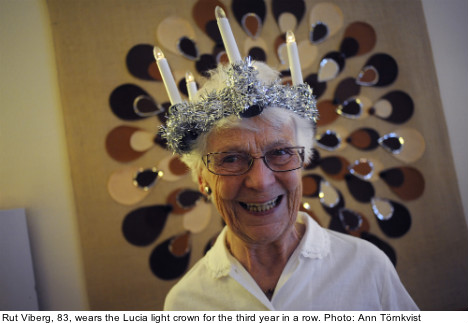 December 13th, 2012, marks the 14th celebration of light for the group of singers who live together in Bandhagen. There have been two power blackouts in Stockholm’s southern suburbs in the past ten days, and the building’s lift has decided to pack it in.

Rut Viberg and the more mobile residents of the cooperative have already made their way downstairs, setting the long tables. Two ginger snaps, a slice of saffron cake, and a clementine on paper plates. And coffee, of course, as is their wont.

CLICK HERE FOR MORE PICTURES FROM THE OCTOGENARIAN LUCIA CHOIR

A heavily decked plastic Christmas tree throws light down the darkened aisle as she cautiously makes her way.

“I really do have to concentrate to walk down the aisle, my balance isn’t what it once was,” Viberg tells The Local. “It’s a personal challenge for me, that’s why I decided I had to do it.”

It’s the third year in a row that Viberg is leading the choir on Lucia, the saint of light widely fêted as Sweden spins towards the winter solstice and days end at 3pm, earlier in the far north. Viberg calls the darkness “spooky” and recalls her days as a nurse, when the Lucia choir would brighten up the wards, literally, and in spirit.

“Although one elderly foreign-born woman who wasn’t familiar with the tradition seemed to think she’d ended up in the afterlife,” Viberg says.

She smiles, printed out lyrics on her lap, then leans forward to lift the plastic crown gingerly from a bag. She checks each one of the tiny plastic bulbs. And steps up to the floor-length mirror in the bare hallway to adjust it.

Choir boy Nils Eric “Nisse” Polsäter, 83, isn’t decked out in the traditional floor-length white chemise but a neighbour is helping him adjust the pointy star-adorned hat worn by “stallardrängar” (grooms in the manger).

“You know, these songs, you learn them by heart as a child but then you’re standing there and can’t remember a word,” she says.

“I’ve heard it’ll get worse,” Carlsson adds with a cheerful wink, as she is joined by yet another resident who is ready to sing. More than 20 residents are waiting outside in the dining room for the four-strong choir. A quick equipment check descends into a temporary hullaballoo, as hands weaker than they once were try to change the battery of one of the candles.

Then it’s time. Silence and then the first verses, they open the door.

“Wait wait wait,” coordinator Solveig Eriksson says, the song melting into a confused whimper. “The lift is working again, let’s wait for the others!”

Some of the residents in the 54 apartments are too frail to come down, regardless of the lift working or not, but some simply cannot face the stairs with walking canes or a walker. A few more show up. The choir tries again, slowly floating into the room and down the aisle. The residents sing along.

By the Christmas tree, Viberg keeps the palm of her hands clasped tight together, like in prayer. Her three maids and one choir boy keep tune. Across Sweden, similar scenes are unfolding everywhere – from day care centres to cathedrals.

A few minutes later, as the choir sweeps out, a resident with two walking canes is helped into the room. He nods at Lucia, who nods back. Two of her maids let go of their two-hand candle grip to wave a quick welcome.

Then it’s time for coffee.

She didn’t bother watching the annual Lucia morning broadcast on Sveriges Television (SVT), which this year showed the celebrations taking place at Uppsala Cathedral. Solveig Eriksson did, but only for a bit before heading downstairs for their own version.

“I turned the TV off when the rapping started,” she says.

“It really isn’t the way it should be done,” chimes in Inga Retsloff, 83, as she sips her coffee.