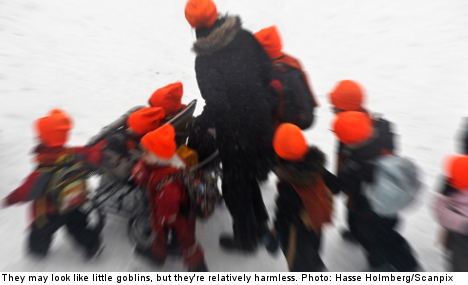 The study, published on Thursday by Sweden’s West University (Högskolan Väst) , looked at children aged seven to 10 in nine countries around the world: Colombia, the Philippines, Italy, Jordan, Kenya, China, Sweden and the US.

Senior psychology lecturer Emma Sorbring led the Swedish study, which is part of a long-term look at how parents rear their children.

She thinks the boys’ lesser propensity for violence compared to their peers in other countries fits well into the social context in Sweden.

”We’ve worked for equality in Sweden for a long time so it is plausible that these results mirror that,” she said in a statement.

She noted that not only parents but daycare staff and teachers contribute to young boys’ development.

”In Sweden we have a very low tolerance level for aggression,” Sorbring noted.

Researchers in the participating countries interviewed 100 children each about their everyday lives. Boys and girls had to answer whether they had shoved or thrown anything at someone in the past month.

The researchers also asked the children about other forms of anti-social behaviours such as bullying or taunting or excluding another child from the group.

As many as 76 percent of the children said they had not engaged in any such behaviour.

Compared with their international peers, Swedish boys were more well-behaved but they were still wont to fight more often than Swedish girls did.

Researchers in all nine countries reported a correlation between reports of physical violence and anti-social behaviour. In other words, where there were incidents of bullying and taunting, the likelihood of the child getting into physical altercations was also higher.