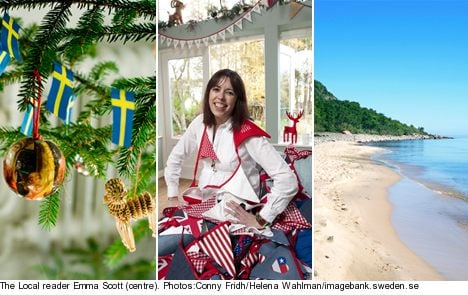 Picture the seasonal scene: the family Volvo packed with presents, a picturesque smattering of snowfall covers the streets, and the raspy tones of Chris Rea accompany the ride.

Problem is for me, the journey “home” would now involve crossing six countries and the English Channel.

And the 20-minute congested commute from the office to apartment in Stockholm doesn’t quite muster the same romanticism.

And anyway, I don’t even own a car.

Sweden may be my home away from home, but I want mince pies over meatballs. I want to hear Noddy Holder blasting out his tuneless salutation from the high street rather than a subdued rendition of Nu är det jul igen round the tree.

I want to open my presents at an unearthly 5am hour as opposed to a respectable two o’clock in the afternoon. On Christmas Day proper, not Christmas Eve.

When it comes to Donald Duck versus the Queen’s speech, however, that is admittedly a somewhat tougher call.

Firstly, what to do after Swedish Christmas, celebrated on Julafton (December 24th), is all unpacked and wrapped up.

On her first Christmas Day in Sweden 20 years ago, American Diane Landau found herself feeling like a misfit.

“Since most Swedish couples have two sides of the family they usually spend Julafton with one side and Christmas Day with the other,” she says.

“With only having my then sambo’s family in Stockholm we had nowhere to go and nothing to do on the 25th. It was quite boring not to have Christmas on Christmas,” she adds.

So she started a tradition of opening her home every year to friends in the same situation.

“We soon found a group of expat couples, a little band of misfits, who join us for our misfit dinner,” she explains.

Now, with a Swedish husband and two kids in tow, balancing both cultures ends up in a double dose of gift-giving for the Landaus.

“There’s the question of when Santa should show up,” she adds.

“I wanted to maintain a memory of my American Christmas, waking early and sleepy-eyed to find something magical had happened in the middle of the night.

“It’s easy for Santa to be magical because you never actually see him.”

Unlike in Sweden, that is, when grandpa or the designated uncle turns up in a white beard and children easily detect the dodgy disguise.

“The kids basically end up with two Christmases,” Landau adds.

A taste of seasonal merriment is essential for Swedes, even those for whom Christmas isn’t complete without a holiday in Thailand.

“They are hybrid traditionalists,” says Landau.

“They take the things they remember the best, what they like the most, and ensure it’s included but otherwise they can modify it to a modern need.”

A tin of anchovies always travels with the Landaus if they travel further afield for Christmas festivities.

“Wherever my husband is in the world he must have his Jansson’s Frestelse – it’s very important to him,” she says.

Jansson’s, featuring cream-soaked shredded potatoes and anchovies, is one of the essential dishes on the Swedish julbord menu – a seasonal take on the famous smorgasbord buffet.

But not everyone chooses to pack their rations of pickled fish.

“Julbord is quite exotic the first time you try it,” says Oscar Gonzalez, a Spaniard who has been living in Sweden for the past 12 years.

Gonzalez takes a more pragmatic approach when it comes to the best things about Swedish Christmas.

“It’s nice because Swedes are in a better mood; they can be more talkative when they get in the Christmas spirit,” he says.

“And all the companies I’ve worked for in Sweden shut down so you can have a really good vacation.”

Gonzalez is escaping the snow in exchange for the sun to spend Christmas on the beach in the Canary Islands, “surrounded by Germans and drunken Brits, I guess.”

“Because of the weather in Sweden you have to stay indoors all the time,” he adds.

“It’s cosy but after one day you have had enough of cosiness.”

The same can’t be said for self-confessed Swedophile Emma Scott who moved back to the UK after six years in Sweden and ensured she took a straw goat with her.

“I absolutely loved Christmas in Sweden and the traditions are probably the biggest thing I’ve brought back with me,” she says.

“The Brits try to celebrate too early – as soon as Halloween is over the next thing we think about is Christmas.

“What I like about Sweden is that it really isn’t the case. It was much less stressful and that was what I enjoyed the most.”

Preparations nowadays include a trip to the local Ikea to stock up on gingerbread dough to make the customary cookies and build a gingerbread house.

“It’s always a complete disaster because it always falls down, but it’s just the fun of making it,” says Scott.

“We always did that in Sweden and we’ve just carried it on.”

Pride of place in her kitchen stands the julbok – the ornamental Christmas goat – which often leaves visitors somewhat perplexed.

“I have to explain it to them, that it’s a Swedish thing,” she says.

“When it comes to decorations in Britain it can be a bit garish and tacky with all the tinsel,” she says.

“Mine are typically Swedish; very much red and white, wooden and handcrafted. I think the Brits have lost their way a little bit there.”

Or perhaps Scott has simply become too swedified.

“Oh no, god forbid,” she exclaims. “As much as I love Swedish Christmas I still have to have my turkey.”