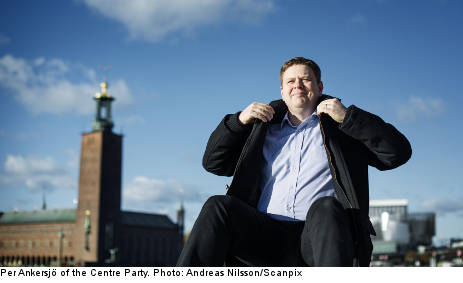 The Centre Party has outlined the new immigration policy in its proposal for a new party programme, writing that Sweden should open its borders and welcome anyone who wants to come to the country.

“Anybody who wants to should be able to create a future here,” Per Ankersjö, chairman of the Centre Party programme group, told the Aftonbladet newspaper.

According to Ankersjö, who is a city commissioner in Stockholm, open borders are a necessity due to Sweden’s lack of labour power and the “flight” from sparsely populated areas.

“Parts of Sweden are dying out and there is a great need for workers in some types of jobs that Swedes don’t want,” said Ankersjö.

He emphasized that the new immigration policy would need to be combined with a new labour market policy. For instance, the Centre Party proposes measures to guarantee more flexibility in the system as well as the introduction of lower wages for those who are new on the labour market.

“I believe most people would choose low-paid work over being alienated for 10 years,” said Ankersjö.

He denied that the Centre Party wants to import foreign workers to fill low-status positions.

“I don’t see it that way,” said Ankersjö.

“Having a job in Sweden involves much greater quality of life than living in poverty or as a refugee elsewhere. That’s how one should view this.”

Ankersjö hopes that Centre Party leader Annie Lööf will push the proposed new immigration policy in parliament. However, she may meet resistance to the idea of open borders: migration minister Tobias Billström of the Moderate Party recently proposed stricter rules around family reunification.

Johan Hedin, the Centre Party’s immigration policy spokesperson, told the TT news agency that he believes prospects are good for getting support from the other Alliance parties.

He added that the new proposal is compatible with the freedom of movement currently existing within the European Union.

“It is not very crowded in Sweden,” Hedin said.

“Of course we have to introduce many reforms, especially on the labour market, in order for people to be able to come here and live their lives. But apart from that nothing is stopping us from opening the borders, I think.”

In a recent poll by Statistics Sweden (Statistiska Centralbyrån), the Centre Party received just 4.4 percent of the votes.

“We are not particularly relevant in Swedish politics today. This proposal could change that,” said Ankersjö.

The Centre Party’s new party programme proposal will be presented on Tuesday December 18th. It will then be reviewed by the party board before being officially accepted at the party convention in March.