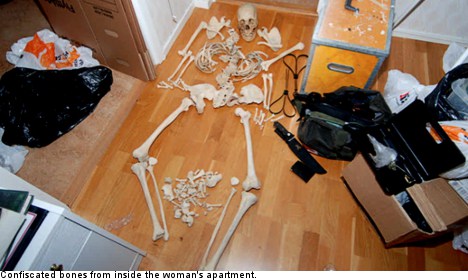 The woman was arrested in September after police arrived at her apartment in response to a call about gunfire and discovered several human skeletons and knives.

Prosecutors have argued she should be jailed for several criminal charges related to the find.

She was charged with violating the peace of the dead (brott mot griftesfriden) after confiscated images and witness statements suggested she used the bones for sexual ends.

She is also facing charges related to weapons violations and for acquiring seven human skulls and other bones.

“I know that it’s strange and sounds bizarre, but skeletons are my hobby,” the 37-year-old told GP.

She was released once the trial concluded two weeks ago. Pending the verdict, the woman is back in her old apartment where the police made the macabre find.

While the prosecutor claimed the 37-year-old used human bones for sexual purposes, she again denied the allegations.

“I have an interest in forensic medicine and I’m passionate about osteology. I have pictures of dead people. I don’t deny that,” she said.

She explained further that she bought the human skeletons to study them.

“I have, with the help of my books, carried out analysis of what injuries they had and how these people died,” she said.

She described herself as an “odd duck” and spoke as well of her struggles with addiction to alcohol and drugs.

The 37-year-old believes she has been the victim of a miscarriage of justice, pointing to the intense media attention attracted by the case both in Sweden and abroad.

“More people have seen my face than a Batman movie,” she said.