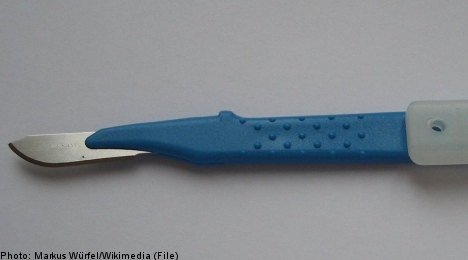 The patient had originally sought help at the clinic north of Stockholm to correct a crooked nose stemming from a previous beating.

However, sometime during the procedure, the surgeon’s scalpel snapped and doctors were unable to figure out what happened to the rogue piece of metal.

The patient, whose gender was not specified in complaint documents filed with the National Board of Health and Welfare (Socialstyrelsen), was subsequently sent home, but after suffering palpitations during the night, prompting a visit to a local emergency room.

But it was only after the patient was x-rayed during a scheduled post-operative checkup that doctors learned a shard of the scalpel was still stuck in the patient’s nasal cavity.

Doctors decided to schedule a new operation to try to remove the scalpel remnants, but when the operation took place, they were unable to find the missing metal bit, despite it showing up clearly in the X-ray.

The patient, who experienced a very long and diffidcult recovery from the anaesthesia, was sent for specialist recovery care at another clinic in Stockholm.

However, doctors plan to search again for the rest of the broken scalpel with the aid of an x-ray screening after he has fully recovered from the first operation.

The incident has been reported to the National Board of Health and Welfare in accordance with Sweden’s Lex Maria, the informal name for regulations governing the reporting of injuries or incidents in the Swedish health care system.