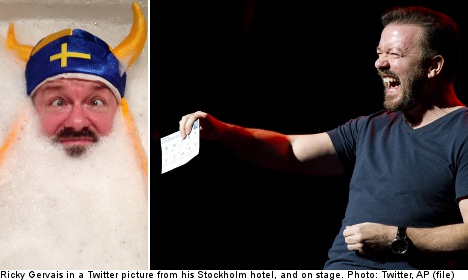 I’ll admit, the lead-up to the Ricky Gervais show in Stockholm was somewhat marred by reports I’d heard from previous shows in Oslo and Gothenburg claiming the performance was all old material.

In fact, Gervais himself admitted it while discussing the three-date Scandinavian tour with UK TV host Graham Norton.

“It’s my greatest hits…some people call it money for old rope,” he said, as the audience laughed.

But would we laugh too?

Stockholm’s Globe Arena was almost at full capacity on Sunday night with fans eager to find out, and it only took a few moments to realize the answer was a resounding yes.

“I love Stockholm, it’s fantastic” Gervais told the crowd, describing a weekend of sightseeing in the Swedish capital.

“But if anything, I’ve learned the sheer beauty of thermal underwear.”

The actor and comedian then took Swedish Vikings by the horns and didn’t let go.

In fact, Vikings and their “raping hats” were a theme for the night, with Gervais pondering just why Swedes (well, at least their ancestors) were so keen on rape during their extensive travels.

His mock scene between a less-than-impressed Viking wife and her sea-bound rape-hungry husband was a particularly memorable moment.

“Are you going to be raping? No? Then you can leave your raping helmet behind.”

But besides the Vikings, and one jab at the sexual undertones of a word like Volvo, Gervais kept mainly to the best bits from his Animals, Politics, Fame, and Science tours.

He discussed AIDS, cancer, the Holocaust, child molestation and homosexual animals – all in a day’s work for The Office star – and the crowd lapped it up.

“This is what I love about Sweden, you’re so liberal. I couldn’t get away with these jokes in other places around the world,” he beamed.

Another central theme for the night was religion, with the outspoken atheist questioning the idea of God and faith. He even dissected a children’s book on Noah’s Ark to the point of convincing the audience that the story was ridiculous and that God and Noah were most likely gay.

For an encore, Gervais took to the stage in a blue and yellow Viking helmet with flowing blonde plaits for one last look at the Vikings and a few final thoughts, before leaving the Stockholm stage for what I certainly hope won’t be the last time.

And while some were unimpressed with a show that was mostly available on DVD ten years ago – the Expressen newspaper’s reviewer Anders Nunstedt gave the show just three out of five stars – the recycling of some jokes didn’t bother me at all.

He tweaked most of the jokes from the DVDs too, so while a lot of the routines were familiar, it never felt scripted.

And anyway, if you’re going to hear a joke twice, who better to hear it from than a man who many consider to be the king of comedy? 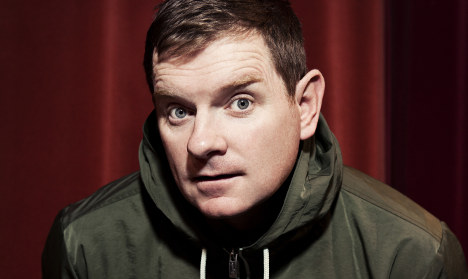 Al Pitcher. Photo: Lifeline
Al Pitcher's carved a niche for himself as the biggest English-language stand-up star in Sweden and his latest stage show, 'How Swede am I?' promises to pull together his best jokes about life in the frozen north. It's also set to be filmed by Swedish television for the first time. The Local caught up with the Kiwi ahead of his final rehearsals in Stockholm.
What's the focus of the show?
Well a) I am funny, which is important. Some comedians pretend like they are not but I like people laughing, as obvious as that sounds.
And b) I have got that outsider's approach. I have seen stuff that completely baffles me but is normal for Swedes and I kind of put a big cracked mirror up against the Swedes.
This is the 'best of” show. I have done three tours in Sweden in four years and now it looks like SVT (Sweden's public broadcaster) wants to show it, so that's why we're putting it all together and filming it. It will be kind of a dream to know that someone in Sweden will be sat at home watching me in my underpants.
The programme is called 'How Swede am I'? What Swedish habits have you picked up since you moved here?
When was living in London before Sweden I got really angry with people pushing me out of the way. Now I just put my head down and I walk away and I think that's a Swedish trait. Internally I still moan to myself and I think I'm still gonna be a really good moaning old man who stares out the window at people, but at the moment I am quite chilled.
Also: my coffee intake. I don't know what it is but I think it must have gone up like 87 percent or something! It just seems to be the only thing to do here you know? 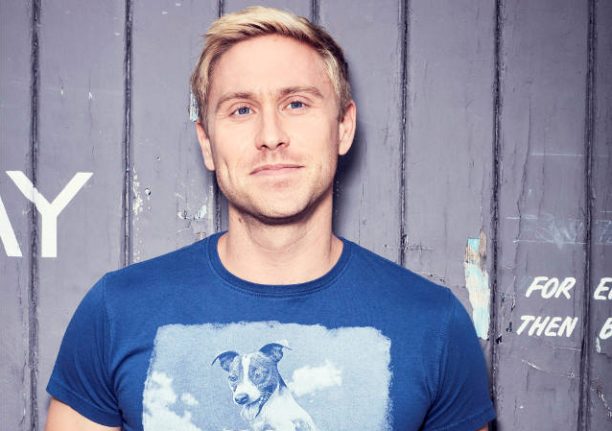 COMEDY
‘It’s a dream to know Swedes will watch me in their pants’
Url copied to clipboard!