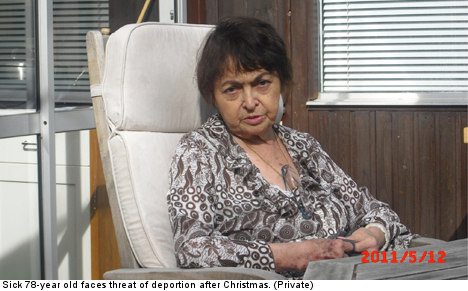 In a case echoing the now-famous tribulations of 91-year-old Ganna Chyzhevska, who, despite suffering from dementia, was to be deported to Ukraine before her family finally won on appeal, the Colombian grandmother is so sick that her family doubts she will even make it onto the airplane.

Luzlinda, 78, has been living in Sweden for the last two years with her only daughter and her daughter’s Swedish husband Mats, who themselves have lived in Sweden for more than two decades.

But Luzlinda’s older sister, who long took care of her in Colombia, is about to move to the United States, leaving no one in Colombia to care for her.

“My wife wrote to the Colombian government and asked how they would help my mother-in-law if she was sent back. They were honest and said they wouldn’t,” Mats told The Local

“To them, taking care of the old is a matter for the family.”

Earlier this year, the family filed the application for a Swedish residence permit for Luzlinda but saw it rejected in July by the Migration Board.

While they were waiting, they asked a well-known dementia doctor to assess Luzlinda’s health. The doctor testified in writing that she suffered severe senility.

The family then filed new papers with the Migration Board asking that they at least delay the deportation process, a term known as inhibition in Swedish legal terms.

“We thought our case was solid. But it’s like the doctor’s note and referring to similar cases just didn’t matter,” Mats said when they realized it was all to no avail.

Three days after filing the family filed the documents, they were returned.

“They didn’t even provide a motivation for their decision, they’d just rubber-stamped the word ‘denied’ on the appeal when they sent it back to us,” Mats explained.

Son-in-law Mats said the family could not afford to put Luzlinda in an elderly care facility in Colombia, but is mostly worried that she would not even survive the journey there.

“A symptom of her dementia is that she can become aggressive so they might not even let her come aboard. And if they do let her on the plane, she is going to need help to go to the bathroom. She can’t take care of herself in any way,” he explained.

But despite the family’s initial shock at the rubber-stamp denial, on Monday they finally learned that the Migration Board has hit the pause button, indefinitely postponing the December 29th deportation date.

“To put it bluntly, the law basically says that you’ll have to go home unless you’re unable to survive the flight,” Petra Gardos Ek of the Migration Board said about reversing the inhibition decision.

The family have all their hopes set on a final review of Luzlinda’s case, which the Migration Board says will hopefully be completed before Christmas.

If Luzlinda is found to be unable to travel at all, she will be granted the right to say in Sweden

On board for the family’s fight to keep Luzlinda in Sweden is Anna Otto, the granddaughter who made headlines with her fight to keep her own 91-year-old grandmother Ganna Chyzhevska, in Sweden.

“When things looked hopeless with my grandmother’s case, my mum couldn’t stop shaking, she was so stressed. So I’m trying to help Luzlinda’s family as much as possible,” said Otto.

Otto went with the family to the Migration Board but the young staff member they spoke to only stared at the speaker phone where an interpreter helped them through the family’s plea for help.

“She never even looked at us,” Otto said.

“The thing is, she could see with her own eyes that Luzlinda can’t take care of herself. They don’t see the individual. They just follow the law, like a computer programme.”

“Wouldn’t it be cheaper to have actual computers?”

Otto has also taken the case to the media alongside a powerful ally – Maria Ferm, migration spokeswoman for the Green Party, which since 2010 has a special deal with the government on migration policy in order to exclude the Sweden Democrats from the decision-making process.

In an op-ed in the tabloid Aftonbladet, Otto and Ferm wrote.

“Until 1997, Sweden had something called the last-link policy. It meant that you could come and live here if you could prove that the remainder of your family, the last link, lived here. The Social Democrats and the Moderate Party decided to scrap the law.”

“Once again, we see what that decision means in practice.”