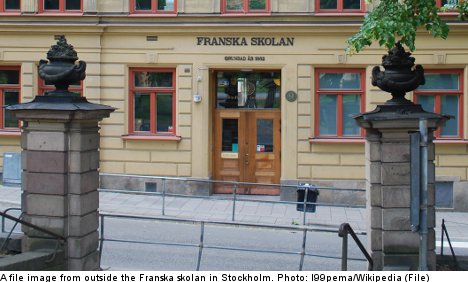 The male substitute teacher is suspected of having attacked a girl and a fellow teacher at Stockholm’s Franska skolan, an exclusive school where all students learn the French language, although the core Swedish curriculum is taught in Swedish.

“It was a substitute teacher who attacked a student. The details of what happened aren’t totally clear,” the chair of the school’s board, Johan Stenberg, told the Aftonbladet newspaper.

According to Stenberg, the substitute teacher had been hired through a staffing agency to teach last Friday, but showed up again on Monday to “clear up” a matter with a female student in grade nine.

During the meeting, which also included the school’s vice principal, the teacher attacked the two before fleeing the scene.

He was arrested later on Monday night and taken in for questioning.

A parent with a child at the school told the paper the man used a wrench in the attack, but police have yet to confirm the information.

Injuries to the girl and the vice principal weren’t serious, and both were treated at the school, which has an enrollment of 850 students from preschool through high school.

The incident has caused concern among parents at the school in light of the recent massacre at the Sandy Hook Elementary School in the United States in which a lone gunman killed 20 children and 6 members of staff before taking his own life.

“It’s totally absurd when you think about what happened in the United States. It’s really strange that they took in a substitute that they didn’t check out,” a parent told Aftonbladet.

Parents have also considered the school safe because one of the prime minister’s children is enrolled there.

“It’s ridiculous that they don’t have higher security. It’s frightening,” said another parent.