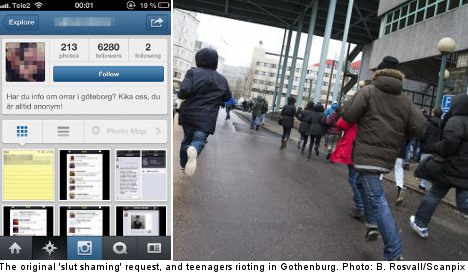 Police described the scene as “unruly and heated” reporting that some of the young people were wearing masks.

“Several bottles and rocks were thrown at police on the scene and some members of the public who passed by the area had their cars damaged,” the police said in a statement.

A student at Plusgymnasiet high shool in Gothenburg was outed as the owner of the anonymous Instagram account, a claim which has not been verified.

“She is out of harm’s way, that was the first thing we made sure of,” Paula Hammargren, spokesperson for the school’s owner Academedia, told The Local as she boarded a train heading for Gothenburg.

The school has asked other schools in Gothenburg to “come and get” their students to calm the situation down.

The turmoil was set off after an Instagram user asked for tips on “sluts” in Gothenburg, and promised anonymity to anyone sending in pictures. More than 200 pictures were submitted, giving names and alleged sexual activities of girls and boys aged 13 to 14.

Followers of the Instagram account ballooned as more and more pictures of Swedish teens labeled as “sluts” and “whores”.

“It grew to 7,000 to 8,000 followers. They were [pictures of] younger siblings of my friends, born around 1997 and later, that were uploaded,” a 22-year-old Gothenburg resident told Aftonbladet.

Once the Instagram account was shut down, the allegations then appeared on a Facebook page. Users began naming each other and the comments field was quickly filled with threats of violence.

A second Facebook page called for people to assemble at the school of the 17-year-old girl believed to have posted the initial ‘slut request’ and then shared the pictures of the underage girls. That page reportedly said the older girl needed to be beaten up as punishment.

Expecting trouble, police had gathered at the Plusgymnasiet high school by 8.30am on Tuesday.

“As far as I know, about 600 said they were coming on the Facebook event page and are heading here,” police spokesman Fredrik Dahlgren told TT this morning.

Certain streets around the school have been blocked off, with horse-mounted police, SWAT teams, and police using city buses to shuttle people away from the scene.

One witness told the Aftonbladet newspaper that the situation seemed to be spiraling out of control.

“The protesters are kicking down lampposts and jumping on cars,” he told the paper.

“It doesn’t feel like we have control of the situation at the moment,” he told Aftonbladet.

The rioting students then moved over to the Nordstan mall in central Gothenburg, forcing confused holiday shoppers to take cover inside stores as police work to bring the unruly teens under control.

“They rushed in and were chasing one another and shouting threats,” one frightened shopper told TT.

Police have parked a van in front of one of the mall entrances, according to TT, in an effort to block the advance of the angry mob.

Later in the day, around 15 young people were detained at the Nordstan mall for disturbing the public order.

Police reported that a total of 27 youths had been arrested in connection with Tuesday’s riots.

By 2pm, the scene at the mall had calmed down.

“There hasn’t been any damage that we know of,” Nordstan mall marketing director Anders Larsson told TT, adding that the mall has decided to beef up security for the rest of the day as a precaution against further disturbances.

The incident comes on the day after as it emerged that new policies governing the popular image-sharing site, recently purchased by Facebook, would enable it to use members’ names and images alongside marketing messages.

The changes prompted an outpouring of angry comments on Twitter and other social media forums, and also raised concerned among privacy advocates that the company could exploit images of users as young as 13.

Founded in 2010, Instragram is a free photo-sharing program and social network that allows users to apply digital filters to their pictures and then share them with other Instagram users.

As of September 2012, the service had an estimated 100 million registered users.