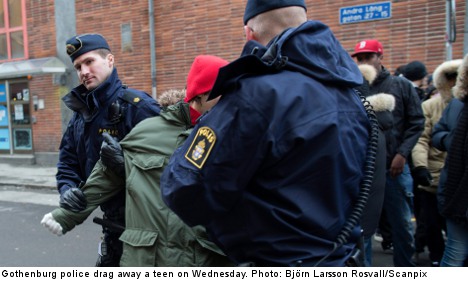 Several hundred teens had assembled outside the Framtidsgymnasiet high school on Wednesday in a situation described as “tense” in local media reports.

The scene echoed those from Tuesday when high school students assembled outside the Plusgynmasiet high school in an attempt to find the owner of an anonymous Instagram account where young boys and girls were hung out to dry with lewd accusations about their sex lives.

Tuesday’s protests spilled into vandalism and saw the 27 arrests of what police called “rabble rousers”.

The teenagers again clashed with police just after lunch Wednesday, with fire crackers and fireworks being set off by members of the crowd.

The chaotic scene prompted a nearby office housing members of the city’s family care division to close its doors after people tried to storm one of the entrances.

The Framtidsgymnasiet principal, Jörgen Frohm, said there was no reason for the teenagers to assemble there.

“There are rumours they’re going to attack but we have no idea why,” he told TT.

The gathering on Tuesday, organized on Facebook by a group that reportedly wanted to beat up the Instagram account user who released the names of all the cat callers, turned violent in part.

Some in the crowd hurled bottles and stones at the police.

A video uploaded to YouTube shows one girl being pushed violently into the gutter, before a person aims a kick at her head.

And while the prosecutor says there are lingering suspicions about the 17-year-old girl who was strung out as the Instagram account owner, the girl has been set free.

“There aren’t strong suspicions, if I explain it that way.”

The teenage girl, who herself had her picture posted with claims about her private life being published in the ‘slut shaming’ whirlwind, says she never set up the account.

She is currently at a secret location.

GOTHENBURG
How to show your parents a good time in Gothenburg