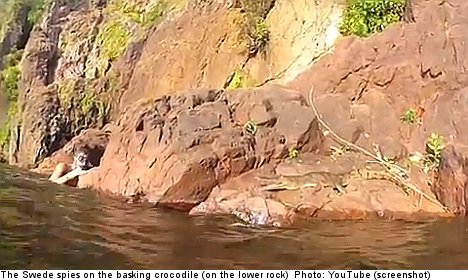 Hellberg was swimming with his two friends Ulrik and Felix at the Litchfield National Park in far northern Australia.

“When Ulrik spotted the crocodile on the cliff just by the water, I swam closer, thinking it would just run away when I got too close.

“But then the crocodile decided to take a leap out into the water, where it landed on Felix’s shoulder.”

The Swedish tourists made headlines worldwide after uploading the video of their meeting with the freshwater crocodile.

The YouTube clip (featured below) shows Felix edging closer to a basking crocodile, eventually frightening it into taking a run up and leaping over his head as it splashes into the water.

The video has been viewed over 250,000 times since it was uploaded last week.

However, experts have revealed that the Swedes were in no danger at all, and that swimming is actually allowed in the area.

“Freshies can in fact bite but it’s rare,” crocodile biologist Professor Grahame Webb in the Northern Territory told The Local about the particular freshwater species featured in the clip.

“It’s unusual to see it jump like this, but these small ones have a fair gallop to them so I’m not surprised.”

After the near-miss, Felix is seen swimming away laughing and saying the equivalent of “bloody hell” in Swedish.

Hellberg and his friends have since referred to the star of the video as Super Croc in the comments below, which include a mixed bag of viewers from around the world.

“Most of the people that commented on our video liked it, but they also said how utterly stupid it really was to go that close to the crocodile,” Hellberg admitted.

Meanwhile, Webb, who claims freshwater crocodiles are “somewhat harmless”, adds that the Swedes were lucky they weren’t faced with the other type of crocodile that lurks in Australian waters.

“Had they been swimming in an area with saltwater crocodiles and approached a large one like this, well, there’s a good chance they would not have survived,” he said.

Adult saltwater crocodiles are the world’s largest reptile, and can grow to be over six metres long and weigh more than 1,000 kilogrammes.