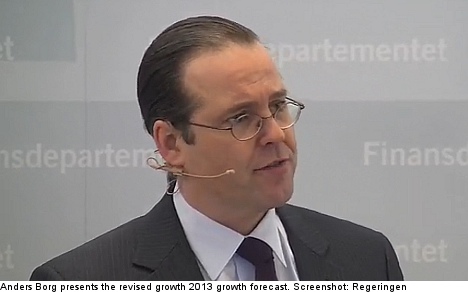 “The recovery is going to be late and fragile. The labour market can be described as weak and soft in the coming years,” Borg told reporters on Friday.

The government also revised its unemployment forecast for 2013, expecting Sweden’s jobless rate to rise to 8.2 percent, compared with the previous forecast of 7.5 percent.

Borg added that Sweden would likely run a budget deficit for three years in a row from 2012 through 2014.

“It’s become increasingly clear that the crisis in Europe and developments in the United States are having a negative impact on employment and growth in Sweden,” Borg said in a statement.

Borg admitted it would be hard to predict exactly how bad things would get, hinting the government may implement measures to prop up growth next year and ahead in 2014 and 2015.

“It may include reviewing labour market rules and perhaps implement some job creation measures somewhat earlier,” he said.

The government’s previous forecast, released in September, has been roundly criticized as being too optimistic.

And many analysts and institutions have since issued more conservative growth predictions for the Swedish economy.

The lower forecast announced by Borg on Friday brings the government closer inline with other predictions.

Earlier this week, Sweden’s National Institute of Economic Research (Konjunkturinstitutet) said it expected Sweden’s GDP to grow by 0.8 percent in 2013, with unemployment expected to hit 8.3 percent.

The Riksbank, which on Wednesday cut Sweden’s benchmark interest rate down to 1.0 percent, expects 1.2 percent GDP growth in 2013 and a jobless rate of 8.1 percent.

SAS
‘We agree to disagree’: Still no progress in marathon SAS strike talks