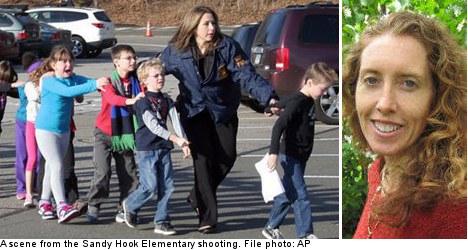 In the days leading up to the Christmas holidays, while Swedish news is filled with complaints about snow removal and Disney’s cuts on the Christmas Eve classic “Santa’s Workshop,” the US news has been dominated by a much darker event: the shooting at Sandy Hook Elementary School that took the lives of 20 children and six adults.

Here, as a token representative of “America” across the Atlantic, the question I’ve fielded most in the wake of this tragedy is this: Why does the US government allow its citizens to own guns at all, let alone semi-automatic weapons?

Why doesn’t the country follow in the footsteps of Japan (or, for that matter, Sweden) and heavily restrict or ban gun ownership?

This is a hard question for me to answer, especially since I personally don’t agree that ordinary citizens should own guns. However, when asked these questions, I feel like I owe my native country a more thoughtful explanation.

The right to bear arms is, after all, the Second Amendment to the Constitution; a fundamental piece of the Bill of Rights. In fact, the amendment advocates for a “well regulated militia” as “necessary to the security of a free state.”

While I personally believe the Second Amendment is an outdated relic from another, much different society, I do recognize this fundamental stumbling block: If you start messing with the groundwork of the country, where do you stop? Does this mean that other rights, like freedom of speech, for example, can also be revoked?

And so the debates about gun control, mental health care, and other related factors begin.

But the question I haven’t been asked, the question that is just as relevant, is this: how do US parents feel about sending their kids to school every day after an event like this?

It is not, of course, the first school massacre to shake a quiet suburban town. And it’s only “successful” mass shootings that make national news; kids who bring guns to school but do not succeed in shooting anyone only make local news, if that.

While it’s true that, statistically, it’s much more dangerous for a child to get into a car than to go to school in the US, many of my US friends attest that there’s something about this kind of senseless violence that makes it hard to be rational.

Coming from California, often portrayed on film as a sunny, warm and glamorous paradise, I’m often asked by Swedes why we moved here. The incident at Sandy Hook is an awful and extreme example of the trade-off we made when we moved: “exciting” (but, for the record, not particularly warm or sunny) San Francisco for safer Sweden.

While Sweden, like all societies, has its problems, it is generally a wonderful place to be a child.

And as I dropped my own son Erik off at his elementary school today, I reflected once again on how happy I am that my kids are spending their younger years here.

It is a society where our kids can safely ride their bikes to school—in California, our suburban street was so dangerous that we had to drive our bikes to the local park in order to ride.

To my knowledge, schools do not spend time every year warning kids about “stranger danger.” The idea that a shooter might come to Erik’s school in Sweden has never once entered my mind.

Of course, it is still possible that our child could also be the victim of a school shooting. In fact, just last year, Sweden’s neighbor Norway hosted its own horrible mass shooting.

But I really, truly believe it’s extremely unlikely to happen to us here in Sweden. I wouldn’t feel quite as confident if I lived back in the U.S.

What is it about Sweden that makes it feel safer here? A social safety net that includes mental health care? Fewer guns? Bike paths and slower traffic?

I’m not sure, but the difference is striking. Most kids here don’t spend their childhoods in fear of all the dangers in society. And neither do the parents.

I, like many others around the world, want my children to live in a more peaceful world, a world less driven by fear. A peaceful childhood in Sweden seems to be a good start.

It’s something Sweden does well, something that many other countries could learn from. 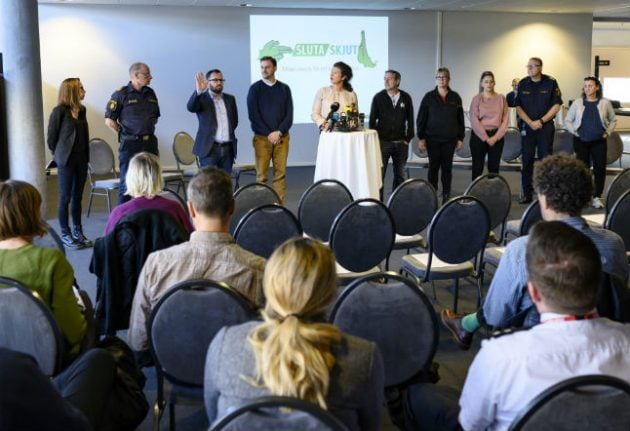 Ten representatives of the agencies involved in Sluta Skjut gave a press conference on Wednesday. Photo: Johan Nilsson/TT
Under the city's Sluta Skjut (Stop Shooting) scheme, nine known gang members were on Tuesday forced to attend a meeting where they were confronted by police, nurses, bereaved parents, social workers and others, all of whom sought to convince them to leave their criminal lives.
Sintèus told a press conference that he was worried that the fatal shooting of Jaffar, a 15-year-old boy, on Saturday night in a pizzeria near Malmö's Möllevånstorget square, would change the dynamic of the so-called 'call-in'.
“I can honestly say that I was worried before this call-in,” he said. “I would like to say that this was a call-in where we could tell with all of them that it sunk in.”
The nine men had all been sentenced for various crimes, and had to attend the meeting as part of their probation. Three of those invited chose not to come, thereby risking a 15-day prison sentence.
READ ALSO:
The meeting was the third since the Sluta Skjut project began last year. The project uses the Group Violence Intervention technique developed by Professor David Kennedy, who leads the National Network for Safe Communities (NNSC) at John Jay College in New York.
NNSC claims that the technique cut youth homicide in Boston by 63 percent and the number of shootings by 27 percent when it was launched there in the 1990s.
The police briefly uploaded a video of a rehearsal involved carried out before the event took place on Tuesday but later took it down. The Sydsvenskan newspaper published a clip on its website (In Swedish).
The video shows Dejan, from the local probation services; Sedat Arif, a Malmö city councillor from Macedonia who explained his tough upbringing in Rosengård, Anna Kosztovics, who leads the unit helping gang members leave crime, and Ebba, a deacon from the Swedish church, as well as two police officers and Ola Sjöstrand, Malmö's chief prosecutor.
Boel Håkansson, with the Swedish police's national unit NOA, said that so far 30 young men had shown interest in leaving criminal life. “That's one result of the work in Sluta Skjut, but we have a lot more to do,” she said.
She also stressed that, even after the shootings last Saturday and on Monday, the number of fatal shootings since the project began was still down dramatically on 2018.
At Tuesday's meeting, the nine young men were lectured by Lizette Vargas, a nurse who has helped treat some of those admitted to Malmö University Hospital with bullet wounds.
“I told them what it looks like when someone comes into the accident and emergency department with bullet wounds,” she said at the press conference, according to the Sydsvenskan newspaper. “I explained how we in our profession feel when we look after a trauma patient and handle their friends and relatives.”
She said that she felt the men had been affected by what she said. “They became upset. We had made contact when our eyes met. You can tell it's sinking in.”
At the meeting on Tuesday there were more than 70 people, including representatives of sports clubs, religious organisations, and the local city government, all of whom offered various services to help the men leave criminal life.
A mother, whose adult son had died of an illness, told the men what it was like to lose a child.
But as well as the soft sell, there was a harder message.
“We are not going to accept that either you, or those you hang about with, use guns or violence,” Sintéus told them. “If you choose to continue doing that nonetheless, the police and other authorities are going to have a minute focus on everyone in the most violent group.”
Under Group Violence Intervention, police put the lives of those deemed to still be engaged in violent crime under the microscope, carrying out frequent spot checks on them.
“We know who you are and who you hang out with,” added Glen Sjögren, who has worked for Malmö police for 40 years.  “We do not want more young kids to end their lives in a pool of blood.”
SHOW COMMENTS

CRIME
Bomb attacks: ‘Sweden is either described as a war zone or heaven on earth’ 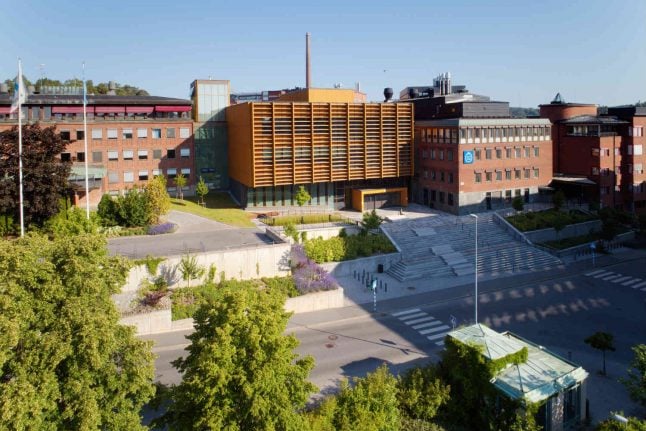