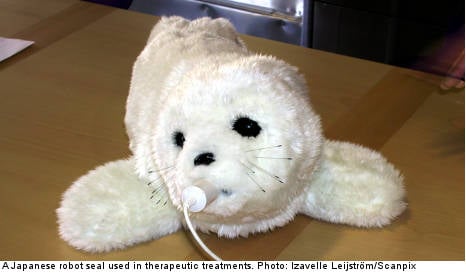 A robot seal, that is, which is meant to boost well-being among elderly people.

A local care trust in Sjöbo, south Sweden, decided to order the Japanese invention in order to bring cheer and comfort to the elderly residents.

The Japanese robot seals are used in therapeutic care for children and elderly people. They are programmed to react to touch and to show signs of appreciation.

“The seal has appealing eyes and soft fur which is pleasant to touch,” Berit Lundström, chair of the Sjöbo care trust, told the local Skånskan newspaper.

“It could bring comfort to elderly people who feel anxious,” she added.

The reason is that most care recipients have met dogs in the past and are familiar with their behaviour. When they realize that the robot dog is not real, they feel disappointed.

Because they are not used to interacting with seals, it is easier for them to accept a robot version of the animal.

However, the Japanese robot seal is the most effective when it is seen as real.

The Linköping University study also showed that both children and elderly people become happy and more engaged in their surroundings after meeting the seal, which has a calming effect.

Lundström believes a robot has many advantages over, say, a real cat or a dog. A robot is easier to handle and to take care of and there are no risks for allergic reactions.

“If you put it in someone’s lap it stays there,” said Lundström.

She added that the seal will complement rather than replace other activities and tasks carried out by care home staff.