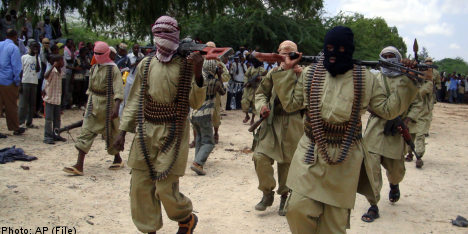 “The defendants are not aspiring terrorists, they are terrorists. They did more than receive terrorist training: they used it in terrorist operations with al-Shabaab,” said George Venizelos of the FBI in New York.

The two Swedes, aged 27 and 29, along with a 23-year-old defendant, are accused of participating in weapons and explosives training with al-Shabaab, a United States-designated terrorist group linked to al-Qaeda, during a four-year period beginning in 2008.

If found guilty they could face lifetime in prison.

The men were arrested in August by authorities in Africa while going to Yemen. They appeared in the Brooklyn court with the aid of a Swedish interpreter.

Much of the case is shrouded in mystery, reports the New York Times. It remained under seal for four months and the court documents unsealed on Friday contained little elaboration on the crimes or any indication of why the case was brought in New York.

According to the Swedish Foreign Ministry, staff from the Swedish consulate visited the two Swedes and reported that they are well “considering the circumstances”.

Sweden has not objected to the men’s extradition to the United States.

“This is a legal issue between Djibouti and the USA,” Sara Brandt-Hansen, Foreign Ministry spokeswoman, told the TT news agency.

“We will use every tool at our disposal to combat terrorist groups, deter terrorist activity and incapacitate individual terrorists,” said Loretta E. Lynch, the United States attorney for the Eastern District of New York.