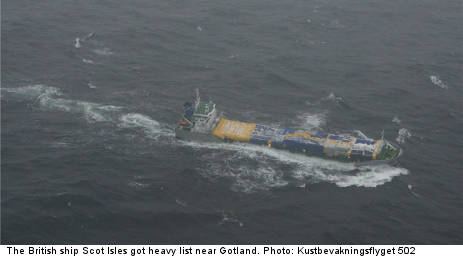 The seven-strong crew on board the cargo ship, Scot Isles, raised alarm around 8am on Monday, the morning of Christmas Eve.

The ship’s cargo had slid over to one side, putting the vessel off balance.

The sea is rough in the area today, with three to five metre-high waves, poor visibility, thick fog and winds of up to 15 metres per second, according to rescue services.

“The message was that the vessel had a heavy list and that the situation was serious.”

A rescue helicopter was sent from Visby, on the Baltic island of Gotland, to the ship. Its position was close to Swedish territory south east of Gotland.

The helicopter circulated above the ship and established contact with the crew.

At 11 am the helicopter made its way back to Visby after a Swedish Coast Guard ship arrived at the scene.

It was still possible to steer the ship and the captain decided to navigate it back to Latvia under supervision of the Swedish Coast Guard.

A Latvian rescue ship was dispatched to escort the British vessel once it entered Latvian waters.

The Scot Isles ship is a bulk carrier. It is 99 metres long and 31 metres wide.

At lunch-time on Sunday there were no injuries reported.