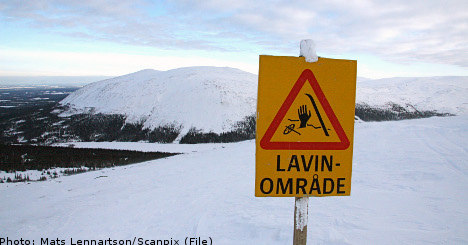 Certain areas are at higher risk than others. In ski resorts Bydalen and Tänndalen, the avalanche risk has been classed as a three on a five-point scale for Wednesday.

A class three warning means avalanches caused by people are likely, and spontaneous avalanches are possible.

“Pisted areas are still safe, but heading out into other areas could be fatal. Off-piste, the avalanche risk is very high,” said Kjell Johansson of the Östersund police force to the TT news agency.

The Bydalen piste system was most recently hit by an avalanche just over a week ago, although no one was caught in it.

The avalanche risk is also high in ski resort Åre, where it has been classed as a two on the risk scale.

Winds in this area look to hit up to 13 metres per second on Wednesday afternoon, according to the Mountain Safety Council of Sweden (Fjällsäkerhetsrådet).

In resorts Vemdalen and Ramundberget, the avalanche risk has been classed as one on the same scale.