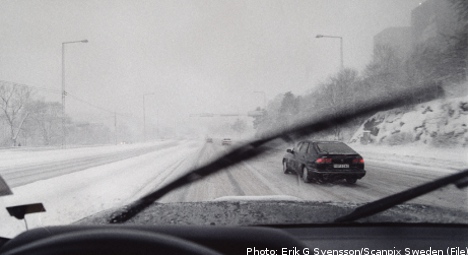 Slippery road conditions have already led to two severe car accidents since Christmas, with one woman dying after a crash in Dalarna and several people taken to hospital after another in Värmland.

And the bad road conditions are set to continue into the weekend.

“If it begins raining or if the temperature rises above zero, then the packed snow can thaw and become ice, and the risk is especially serious in southern Värmlnd and in much of Götaland,” SMHI meteorologist Ibrahim Al-Mausaweat told the Expressen newspaper.

“It can become properly slippery.”

After a white Christmas in most parts of Sweden, the temperatures continue to rise, likely bringing rainfall to Götaland and Svealand over the weekend.

“Milder air coming in from the west will arrive during the weekend, which makes the temperatures hike a few degrees above freezing in Götaland and Svealand. When the snow thaws it can be slippery on the roads. It can become really slushy,” Al-Mausawe said.

The entire east coast of Sweden can expect to be hit by the slushy roads, according to the agency.

For a closer look at the forecast around the rest of Sweden, click here