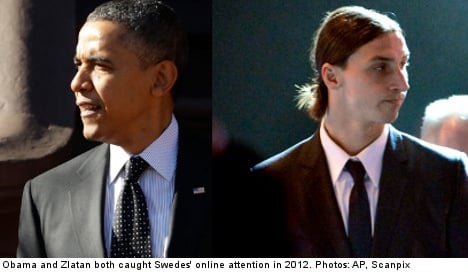 Swedes’ surfing spiked on one particular day in mid-November when politics and football combined to lure Swedes online.

Firstly, the Expressen newspaper began its exposé of a video showing top politicians from the Sweden Democrat party hurling racist and sexist abuse at passers-by on a night out of heavy drinking.

The political scandal happened to coincide with Swedish footballer Zlatan Ibrahimovic’s four-goal spree in the friendly against England, where his bicycle kick had newspapers across the world asking if it was the most beautiful goal in the history of the game.

“When there are still or moving pictures of something that is also emotive, that’s when things really get going. And this was an exceptional day,” said Telia’s head of information Lars Joelsson to news agency TT.

The figures are based on telecom giant Telia’s surf index, which compiles the traffic from the company’s fixed and mobile networks.

“Because of the explosive growth of smart phones and surf tablets over the past few years, our online time and what we do with it become an interesting reflection of our lives.”

As going online from a mobile phone has quickly gone from an absurd thought to many people’s favourite pastime, traffic rarely slakes, even over the Christmas holidays.

“It’s especially interesting to look at how our internet habits have changed over Christmas, as we’re more connected than ever,” Matsgård said.

It seems Swedes are reluctant to let go of their smart phones even over Christmas dinner, as network traffic on December 24 increased by 135 percent compared to 2011, according to telecom company Telenor.

Swedes’ time spent online peaked during the second week in December. The summer months instead saw traffic easing, and according to the surf index, Midsummer was the most disconnected day of 2012.