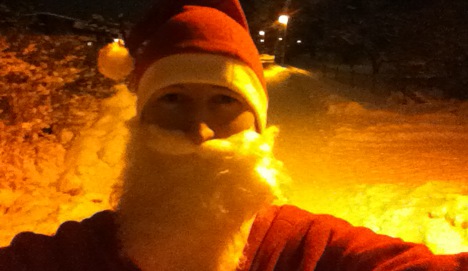 I laced up my boots, adjusted my white beard, and snuck out into the snow while everyone else was watching Donald Duck.

It was Christmas Eve and I was Father Christmas himself, and it wasn’t just the sticky suit that had me in a cold sweat, nor was it the pillow I’d shoved under my jacket for that one-too-many-mince pies belly.

You see, I didn’t know what I was doing.

What would four families make of a Swedish Santa with an Australian accent?

What’s the go-to phrase of a Swedish Santa? Does he have a red-nosed reindeer or a red-nosed moose? And how on earth do you say Ho Ho Ho in Swedish? Hej Hej Hej?

After spending last Christmas here, I was well prepared for most of the Swedish Yuletide traditions, however.

I wasn’t surprised, for example, at the fuss made about the hidden almond in the porridge pot (or that the “lucky” person to find it would surely be next to marry).

I wasn’t surprised to see the fanfare greeting the annual Donald Duck show – a sacred family hour spent watching the same 80-year-old cartoons as every year before.

I can admit I even knew the words to some of the Snapsvisor (drinking songs) that the adults sing before downing shots of bitterly strong spirits at the dinner table.

And I was ready for the age-old tradition of the “next-door Santa”, where someone “ducks out for the newspaper” while secretly dressing up as Father Christmas, heading next door, and handing out the presents for the neighbouring family.

All on Christmas Eve. Strange, I know.

But one thing I could never have anticipated was that a few months back, the old man who played Santa for us in 2011 moved on to a better place and we had no replacement (I should add, he hadn’t died, just moved to a fancy retirement home a bit closer to the city).

My girlfriend’s grandparents turned to the only person they knew who could save the festivities.

“We need you, Oliver. We need you to save Christmas,” the elderly grandmother said, or something to that effect that was probably less dramatic.

I knew what she meant though, and accepted the honour with a heart of pride and a stomach of butterflies.

As I crunched through the snow on that cold Uppsala night, my mind wandered back to Australia, where my brothers would be enjoying the summer sunshine which, they had already assured me, was over 40 degrees strong. A beer on the beach, a barbecue, maybe a surf…

But me, I was rehearsing my Swedish lines in the sub-zero climes of Scandinavia.

Finns det några snälla barn här? (Are there any good children here?) I repeated to myself, realizing you can’t trick a child if you can’t pronounce your lines.

As I walked on, taking the long way around the block for a grander entry, I noticed families peeping through their windows as I passed. Excited children. Even excited parents.

I gave them all a merry wave and moved on with a spring in my step. My nerves were turning into excitement, and it wouldn’t be the last Christmas miracle of the night.

This is what a Christmas is supposed to be like, I remember thinking. Snow underfoot and a chill in the air. This is what all those Christmas carols and cards are about.

Soon, I was on the home stretch and approaching the house where the whole extended family was waiting with the children’s teeny faces pressed up against the window in anticipation.

I rang the doorbell, said my line (twice for good measure) then proceeded to hand out the dozens of julklappar from under the tree to the family.

“What an interesting accent Santa has,” I heard someone say, while another prodded the pillow in my belly. But this Santa just laughed (hej, hej, hej) and spread his good cheer with one and all.

When the final present was handed out and the ceremony over, I made my escape in a flash of red and white, while the family devoured their presents.

I would have thrown in a Rudolph joke too, but I couldn’t remember the names of the Swedish reindeer, so opted for a simple farewell instead.

I slammed the front door for good measure and walked upstairs to get changed.

When I rejoined the party, I couldn’t help but notice one young girl was eyeing me with suspicion, studying my face, putting the pieces together, the cogs slowly turning in her innocent little brain.

I stared back, worried she might reveal the horrible truth for the rest of the clan. But instead, she did the most most amazing thing.

In what was surely a Christmas miracle, her eyes lit up and she turned her head to the window, casting a wistful gaze into the snowy night sky, no doubt hoping to catch Santa moving onwards and upwards with his 12 Christmas mooses.

There even seemed to be a tear in her eye, a tear of certain joy and definitely not of disappointed betrayal.

She’d bought the act, Christmas would live on in her heart for at least another year. My job was done.

With that, I turned to my own stash of goodies and let out a silent Christmas chuckle under my breath.