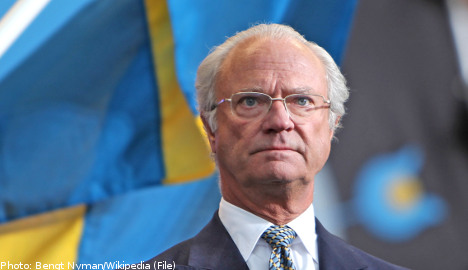 The Royal Court received 122 million Swedish kronor ($19 million) from the Swedish parliament in 2011.

Half of that money went to maintaining and running the royal palaces and estates and half was made up of the Civil List, which is the money provided by the government to meet the official expenses of the royal household.

The opposition parties want the Civil List moneys to be fully accounted for.

The King, however, does not think the public or the media need further insight into how the royals use the money.

“It should not say how many hotdogs I bought the other day and so on,” the King said in a television interview on Sunday.

“It is a good thing we have this kind of debate in the media. It shows that there is full transparency on this matter so I think that is adequate,” the King added.

Last year, the opposition parties decided, against the government, to introduce a discussion with the Royal Court about increasing transparency into the Civil List.

Sunday’s interview on Sveriges Television (SVT) was the first time the King commented on the matter.

“The bulk of the costs are accounted for… Should he, as Head of State, have to account for every single purchase?” Bertil Ternert, the Royal Court spokesman, said in an interview with newspaper Aftonbladet.

“Take our Prime Minister. He receives a salary but does not need to account for how he uses it. If one was to demand that from the King, then he would have to account for every purchase he makes and that would be pretty peculiar,” said Ternert.

“It is definitely not a question of demanding details about what they have for lunch or anything like that,” Peter Erikson, a Green Party MP and the chair of the Parliamentary Constitution Committee (Konstitutionsutskottet), told Sveriges Radio (SR).

“This is simply a question of tax funds being used and so there should also be a decent account for how that money is spent.”